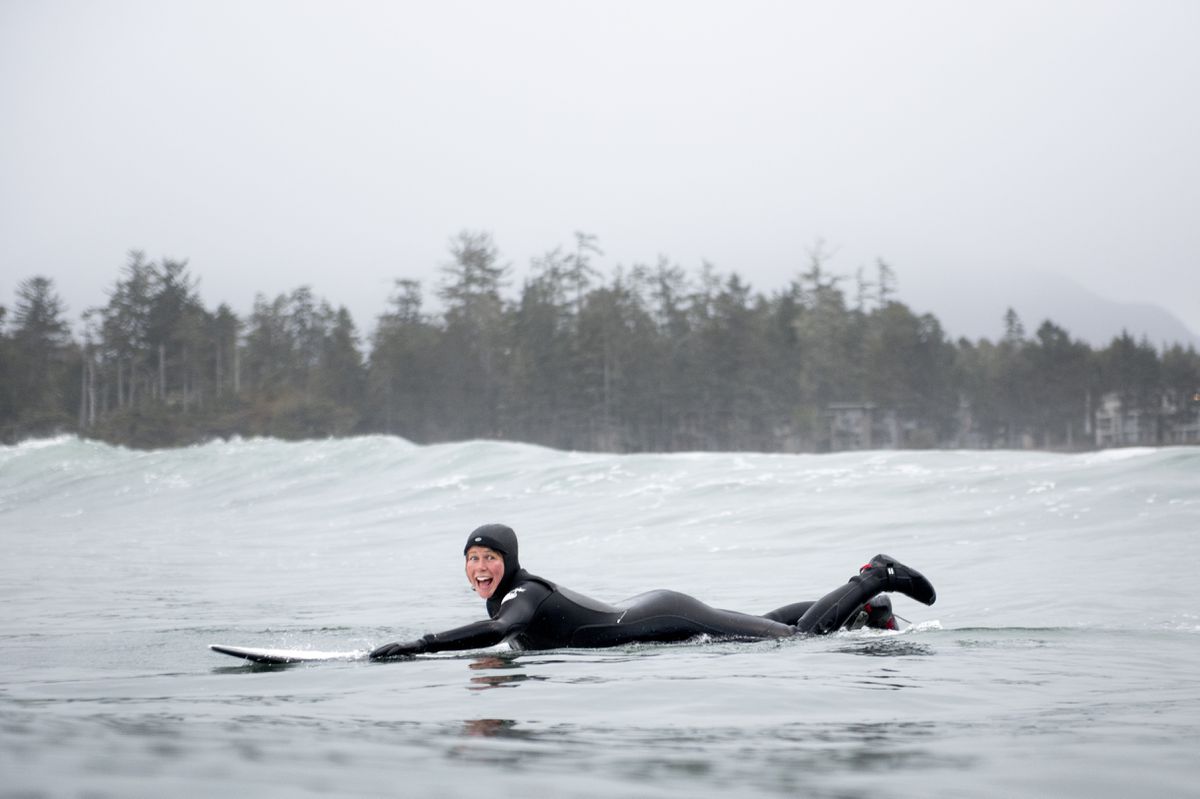 For most Canadians, the prospect of surfing in winter probably suggests beach vacations in Hawaii, Central America or Southern California. But for dedicated aficionados across the country, surfing in Canada is a year-round labor of love.

Although winter surfing occurs in various Canadian coastal locations, rivers and lakes, some locations are among the most established.

Located on the west coast of Vancouver Island in the Clayoquot Sound Biosphere Reserve, Tofino is Canada’s surf mecca. This stunning location has 35 kilometers of surfable beaches – the best being Cox Bay, North Chesterman and Long Beach – and enough surf schools and shops to keep everyone happy.

Tiffany Olsen, manager and instructor at Surf Sister, one of the world’s oldest female-run surf schools, can teach and surf more in winter through lighter management duties.

“I like being on the beaches when they’re a little less busy and I like the big waves,” says Olsen.

For the Tofino winter, she recommends a 5/4 neoprene wetsuit (meaning the material along the torso and upper legs is five millimeters thick, while the arms, shoulders and back of the lower legs have four millimeter panels) as well as a surf hood, gloves and booties.

Originally from Camrose, Alta., Olsen, 34, started surfing 13 years ago in Tofino. She highly recommends lessons and a format like Surf Sister’s, which starts with a beachside tutorial. Of the latter, Olsen says, “A lot of it is safety – how to handle your surfboard, staying safe in the ocean, and a quick guide to catching a wave. Especially in winter, safety is very important.

For example, she says winter waves can be unpredictable and stronger winds can lift boards and hit surfers.

The Surf Sister team checks the beaches every morning and sometimes has to cancel lessons due to weather – winter is Tofino’s main storm-watching season.

Olsen also advises surfing with a buddy, staying waist deep in whitewash when refining skills, and using a large enough surfboard and a leash.

Despite the precautions, Olsen says there are days when the weather is good and the conditions are perfect for beginners.

“With the right suit, I think people are amazed at how warm they stay.”

Google “Great Lakes winter surfing” and you’ll quickly see pictures of people with ice cream in their hair and beards. What drives people to chase the waves in these freezing waters?

Robin Pacquing, 42, is a real estate agent in Oshawa, Ontario, and a well-known figure in the Great Lakes surfing community as well as a Paddle Canada Advanced Stand-Up Paddleboard (SUP) Instructor.

She admits: “The older I get, the colder I am! But going regularly means I’m able to maintain my technique without having to wait for holidays or better weather.

Pacquing first tried surfing on a trip to Hawaii around 2001, but it wasn’t until 2005 that she discovered Great Lakes surfing was a thing – even though she grew up on the shores of Lake Ontario in the Long Branch neighborhood of Toronto.

“It triggered this huge thing in my head – ‘what, people are surfing here!'” Pacquing recalled. “I wanted to do everything I could to learn more, get the gear and get better.”

As a Filipino-Canadian, Pacquing says it was initially intimidating to step into a sport that isn’t known for its diversity. “But I knew there was a connection to my heritage and although it was male dominated, I could make it my own no matter what I looked like,” she says.

Pacquing honed his skills along the shores of Lakes Ontario, Huron and Erie, and met other surfers, who shared information. She also became the first Asian-Canadian to join the Wyldewood Surf Club in Port Colborne, Ontario, one of the oldest surfing institutions on the Great Lakes.

In 2014, Pacquing co-founded Lake Surfistas, a volunteer organization that helps women of all skill levels enjoy surfing, SUP and paddle surfing in the Great Lakes. Although events have been limited during the pandemic, Pacquing hopes they can become more active again this year.

This winter, she’s paddle-surfing about three times a month near her home — balancing her career and family life with her partner and two sons-in-law.

While acknowledging that wetsuit technology has improved dramatically, Pacquing believes beginners should start in more temperate waters and work their way up.

“It can be intimidating,” she says. “Especially if you’ve never been in super cold water or worn a thick wetsuit.”

She recommends a 6/5 thickness for these, eight-millimeter boots and seven-millimeter mitts, and suggests bringing a carafe of warm water to pour over your head when you’re done.

“Don’t overwork yourself,” she warns. “It’s easy to stay out longer than your body wants.”

Lawrencetown, Nova Scotia, about 30 kilometers from Halifax, is known for some of the best surfing on Canada’s east coast, but don’t expect a “Tofino-esque” surf town.

“Clients often say they think they had to go through town because it’s not a town – there are houses on the side of the road,” Nico Manos laughs.

Manos, 38, is Nova Scotia’s first and only professional surfer, which he defines as having lived off without extra income. Along with his wife, Jill, a firefighter and surf instructor, he owns the area’s East Coast Surf School and Lawrencetown Surf Co., which sells surf gear and accessories. While the school is closed in winter, the store operates all year round with a clientele of seasoned surfers.

He learned to surf at Lawrencetown Beach and at 18 began representing the Quicksilver brand. For about a decade, Manos traveled more than half the year, competing, promoting and consulting for Quicksilver and other sponsors before “retiring” to start a family. He and Jill now have two young children.

Manos says that while Nova Scotia has “tons” of surfable beaches, the beaches in Lawrencetown and Martinique stand out for their consistency and suitability for beginners.

Winter brings bigger waves and frigid conditions to and from surfing, but he says the biggest potential for error is wearing the wrong wetsuits in average zero-degree water and not having had courses.

“If you’re not able to identify rips and side currents and a safe exit, it’s going to present the same kind of dangers as if you didn’t know about those things in the summer,” advises Manos.

Otherwise, he recommends switching to a poncho if you’re dressing on the beach and using a softer surfboard wax for better grip.

In winter, Manos does an average of five to seven surf trips per week.

“It makes you feel alive,” he says.

For those looking for a riff on a summer water sport without getting wet, there’s snowkiting.

A winter version of kitesurfing or kitesurfing, it replaces water with snow, and a surfboard or wakeboard with a snowboard or skis.

“A lot of people are already skiers or snowboarders, so if you have those skills, you don’t have to overcome another obstacle while trying to fly the kite,” says Josh Barker, director of kiteboarding associations. Canadian and Alberta Kiteboarding. .

In both roles, Barker organizes events and designs courses, though he says the national association has become less active during the pandemic.

You need enough wind to propel you, as well as a sufficiently large snow or ice surface.

“For people who don’t have mountains on their doorstep or want to spend $120 on a lift ticket, it’s amazing,” says Barker, who lives northwest of Red Deer, Alta. But he stresses the importance of making sure you’re allowed to be in the area and that it’s safe.

He says it’s easy to find local venues and instructors through social media and online searches.

While some extreme enthusiasts catch big air on mountain tops and Barker himself came third in Norway’s Red Bull Ragnarok 100 kilometer race in 2016, with equipment upgrades and appropriate wind and snow conditions, he says snowkiting can be safe and accessible.

“You don’t have to be a young, super strong person to enjoy the sport.”