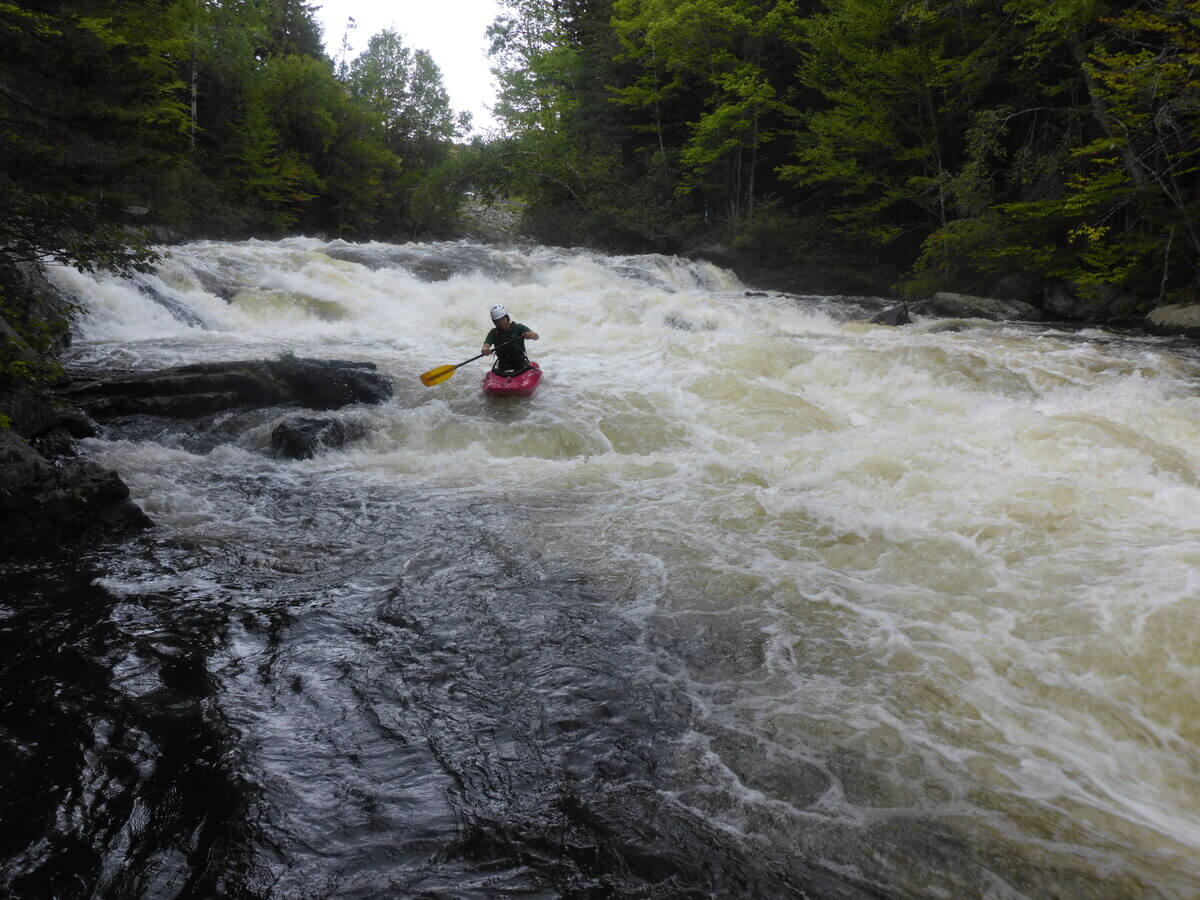 Twenty-six years ago, my late friend Bill Kaiser recruited me to represent the Appalachian Mountain Club in dam permit renewal testing on the Rapid and Magalloway rivers in western Maine. I was one of a dozen participants from several regional paddling organizations.

The objective was to navigate the two rivers in canoes or kayaks for three consecutive days at different release levels and to give feedback on the best volumes for whitewater navigation. The dam owner provided food, lodging and transportation. The responsibilities of the participants were to paddle the rivers and evaluate the releases.

If that sounds like a bargain for an avid whitewater paddler, it was. There was one minor hiccup – although a veteran of many Rapid River tours, I had never heard of the Magalloway River and didn’t know what to expect. When I met the other river testers, the scuttlebutt was that the Magalloway was a very challenging whitewater section that started out with a challenging Class V rapid.

After an entertaining low-volume ride on the Rapide on the first morning, we were transported to the Magalloway for the highest of the three levels to be tested, 1500 cubic feet per second. When our group arrived at the parking lot next to the river, only one participant chose to paddle the class V section. All the others walked to the bottom where a class III rapid started and watched carefully as the lone kayaker finish his race. He had some difficulty tumbling through some nasty holes, but stayed in his boat. Several of us thought we saw a better route by staying tight to the right and plummeting down a vertical ledge near the bottom. The rest of the 2.1 mile trip was a succession of easier but exhilarating rapids.

The following day Magalloway’s test level was 900 cubic feet per second. Again, only one kayaker challenged the Class V. This version received a high rating from everyone.

Flash before Labor Day weekend 2022, my wife Nancy and I learned that several young friends were camping near the Magalloway and paddling the river for a weekend of 1200 cubic feet per second. My trolling email for a Sunday invite for two seniors got a positive response.

We met a large, enthusiastic take-out group at Wilson Mills. The three paddling families were equipped with rafts, canoes and kayaks. Nancy decided to paddle a raft and I brought a kayak.

During lay-up, young Mason Galway elected to attempt the Class V section while the rest of the crew continued down the trail to the Class III launch. At the age of 16, seemingly overnight, Mason became a solid Class IV boater. He scored a perfect 10 by nailing the line on the right.

While Mason played in the waves, the rest of us started boarding one boat at a time from the confined launch area. The first class III is the most complex of the remaining rapids. The slope is steep and full of rocks, drop-offs and sticky holes requiring precise maneuvers. The rolling is difficult on the shallow descent. A kayaker had rolled over and swum the day before and everyone was on high alert. We passed the tricky extensive assortment of river obstacles.

The excitement continued as we moved downstream. The next two rapids were similar to the first but easier. The waves at the bottom offered great surfing opportunities.

Around a corner, we encountered a Class III rapid called Double Wide. Seen from above, there is no obvious route through a maze of weirs and crashing waves. We dove into a tight slot on the right, rode the left side of a wave train past a boat flip hole and negotiated easier rapids and fast water to the exit.

After lunch, we started all over again. Our energetic friends have completed yet another third race. We were right 26 years ago – 1200 cubic feet per second is best.

Several other Maine whitewater adventures are chronicled in my book, “Maine Al Fresco: The Fifty Finest Outdoor Adventures in Maine.”