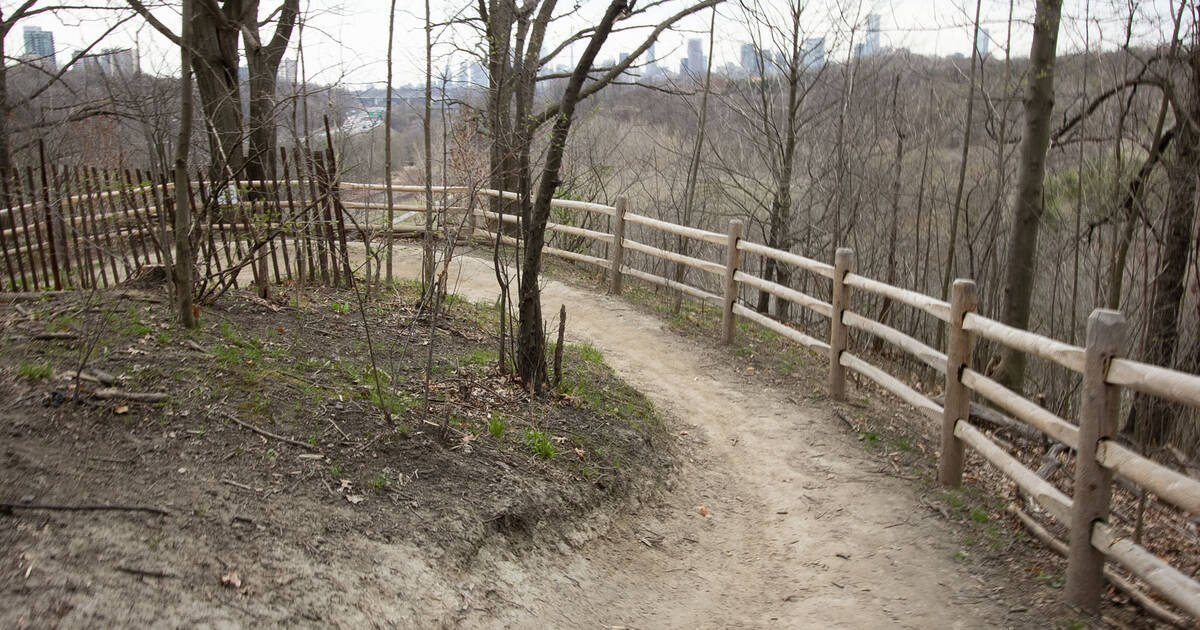 “Isn’t that dangerous?” I asked Sam. “Bike down a hill, down trails with tight turns and jumps doesn’t sound like a really safe idea to me…”

“If you think about it, everything we do has some kind of risk involved. We could have gotten boned by a truck while we were driving around here,” Sam replied. “You don’t get it. It’s all part of the fun. Going up hills and jumps makes you feel so alive. It’s the best therapy there is.”

Tucked away behind the Loblaws on Redway Road (a small road off Laird, in Leaside) we found the trails we were so looking forward to visiting.

We parked on the other side of the lot, away from the store, but a few yards from the trails. I passed this same parking lot every day on my way to work, but never would have guessed that it was also home to Toronto’s best mountain biking trails.

A quick entry to a series of mountain bike trails. Photo via Tanya Mok.

I helped Sam get ready and as he made his way through the forest I started my journey to the bottom of the trail.

The sun was shining and the trees were swaying in the cool April breeze. The sound of birds was occasionally interrupted by the sound of a speeding bicycle.

Coming down the trail, I thought it was strange to see such a beautiful trail so quiet.

“How do they know where they are going? How do they not get lost on the trails? I said to myself. I got to the bottom and found Sam leaning on his bike, smiling. “What a ride man! I have to do it again. I wish I had the energy though…” he said with a smile.

As we climbed back to the top of the trail, I began to realize that my adventure into the world of urban mountain biking had only just begun.

On the way back, I kept thinking about the trails, the bikes, and the idea of ​​speeding along trails that have found their way into the heart of the city.

A trail with a view. Photo by Jonathan Kravchenko.

“What brought you to the sport?” I asked Quincey Orta, an avid mountain biker who works at The Cyclepath. “It’s hard to put your finger on it,” Quincey said.

“I always rode a bike growing up. I just found mountain biking to be soothing. You’re out in nature, there’s no cars around, you get into that state where you feel like you’re in a movie. It’s that ‘flow’ I guess…”

“Let’s say I want to try. Where can I start? I asked Quincey, teasing the idea of ​​maybe, just maybe, trying.

“Well, you want to have a bike that can handle those trails. Ideally, you’d want some sort of suspension as well. Make sure you have a helmet and off you go! It’s simple.” Quincey said with a smile.

“What about, location-wise, where are the trails in Toronto? I was in Crothers Woods recently, but that’s it.” I asked.

Talking shop at the Toronto bike path on Danforth. Photo by Jonathan Kravchenko.

“They all go up and down with the DVP, they run along the whole valley. I’m sure there are trails out west too,” Quincey said.

As we talked, it became clear that, as reckless as the sport seems an outsider to me, there are many safety precautions riders take. Wearing a helmet is of course number one.

Some headsets even have advanced systems like ANGI. ANGI is a sensor that detects collisions or falls. If it detects you’ve been in an accident, it sends you a text message and if you don’t respond to say you’re okay, a 911 call is made with your exact location.

Proper safety gear is a must when riding on potentially dangerous trails. Photo by Jonathan Kravchenko.

Many riders also wear a motorcycle-style jacket with special inlays that protect the spine and ribs in the event of a fall. Yet there is always risk and the element of danger is always present.

Tragically, a few years ago a young man died while riding the trails in Toronto. Bikers I spoke to said he probably wasn’t wearing a helmet and was riding recklessly.

“This accident brought the mountain bike community together.” says Christian Biagini. “Before, we were this unknown group that few people knew about. After the accident, the big questions began to arise. Whose fault is it ? What trails are part of the park? There are so many questions and not many answers. …”

The City’s involvement in mountain bike trails continues to be a hot topic among cyclists.

“I personally don’t think the city shouldn’t get involved.” said Christian. “I think it should stay that way. They let us do our thing, we let them do theirs. What if they decide to monetize it all? So what? The paths that we walk freely, which is the slot machine from someone.”

Other runners, like Quincey Orta, disagree. “I think we could use some help from the city. I think if the city did it right, we could make things safer for everyone.”

At the moment the community is thriving using an app called TrailForks to plot routes and trails. “It’s kind of like Strava, but it’s aimed at mountain bikers,” Quincey said.

“Who maintains all the trails?” I asked.

“I’d like to know,” Quincey chuckled. “Some of the trails are maintained by the city, but most of them are meant to be walking trails, not bike trails. As for who maintains the other ‘rogue’ trails, we like to call them ‘fairies’. trails “. I have no idea who they are.”

“Some days you show up and see that a jump has been fixed. I think that says a lot about the mountain bike community as a whole. Like, it’s not that they’re doing this for the weight or money. It’s just people wanting to help others. We’re also quite dependent on the weather. The trails are just hard-packed dirt, they can be washed out pretty easily if it rains enough.

“I think our [mountain biking] community, especially in Toronto, is probably the friendliest there is,” says Quincey.

“If you have an apartment [tire] there, you can be sure that a passerby will stop to help you. A new hit costs about ten dollars, but you know that by helping someone, you create a better community and if you ever find yourself in their situation, you know someone will help you too. What goes around comes around.”