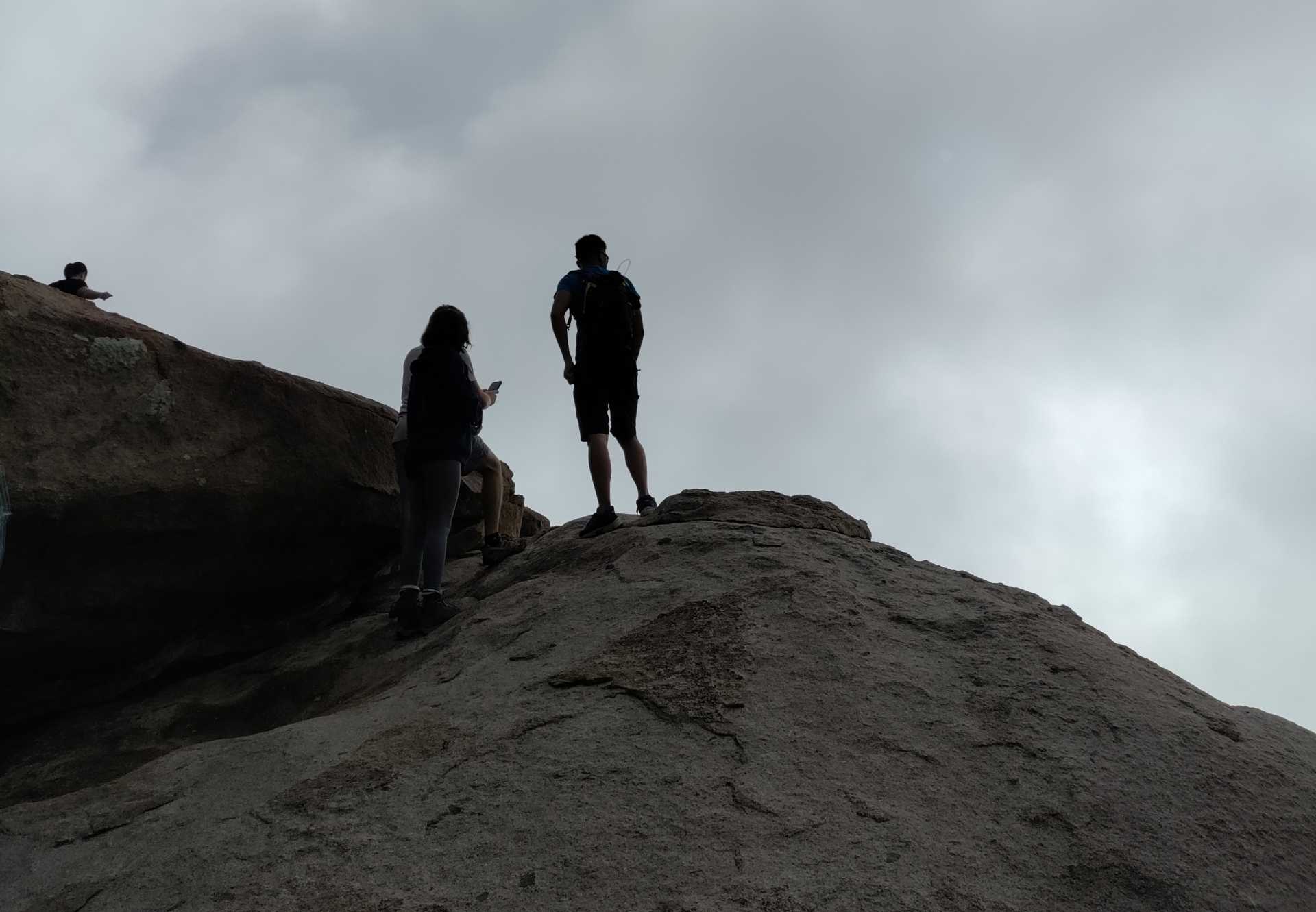 Sunset and Sunrise: Back-to-back Hikes with the UCSD Hike Group

Sunset and sunrise, dusk and dawn. I experienced both on two different peaks with the UC San Diego hiking group, hiking a total of 10 miles.

A friend recently introduced me to the hiking club. So when I checked on Monday and saw two rides on Saturday and Sunday, I quickly put my name in to sign up for rides. Luckily, I was quick, as the limited spots filled up within minutes.

This Saturday afternoon, October 15, I arrived at the Pangea car park, a bit confused as to where exactly to wait.

But, I found my carpool, and thank God we made it safely. We parked somewhere further and walked a bit to finally find the rest of the group. Here we go !

First, we went down. My knees could feel the impact and I wish I had hiking poles. It started to drizzle. Then the drizzle turned into light rain. Some people didn’t bring raincoats and got soaked. One of them brought an umbrella and some walked in their underwear. I had my rain jacket on and draped it over me and my backpack like a hooded cape – much like what Little Red Riding Hood wears. It does well to keep rain out while allowing wind ventilation.

The slope became steeper and steeper. There was a part where we had to climb using our hands and feet. When we got to the top we realized there was an easier way. We inform the people behind us.

At the top we saw a bit of a sunset and the red sun breaking through the clouds.

We still had a ways to go and wanted to make the most of the daylight. It would be tough going down as the rain made everything slippery. So we took a quick group photo and then descended. Of course, some people slipped and fell in the mud. Luckily there were no injuries since our descent was much gentler than our ascent – just a lot of laundry to do afterwards.

Now it was completely dark outside and we turned on our phone lights. Luckily we were a large and noisy group – that way the cougars wouldn’t come. Someone mentioned telling ghost stories. Walking at the front of the peloton without the comfort of being surrounded by smartphone lights, I admit I skipped over a few shadows.

After all that, we went to dinner at La Jolla Village. I went back to my dorm, did some tracking of our hike, took a shower and fell asleep. I had set my alarm clock for 4:30 a.m., but changed my mind and set it for 5:00 a.m. instead.

I woke up the next day feeling like I was going to the airport – that feeling when you’re engaged and have to wake up no matter what. After all, the people driving and organizing the event were so nice that I couldn’t waste their time and effort. I did a sprint race against the clock to the Price Center loop. My body felt good since yesterday, and I arrived just in time.

We rode to the trailhead. It was dark when we arrived, but cars were passing from time to time. You could tell how popular this place is. We regrouped and I ate the hot dog buns I had hastily tossed into my bag. By the time we left, we could kind of see each other’s faces.

We climbed the misty mountain. Most people didn’t talk much, maybe because the climb was tiring. I was talking to some people, powering up and talking to others until I was near the front.

We reached Potato Chip Rock, still shrouded in mist. The Potato Chip is slippery, maybe from yesterday’s rain and mud on everyone’s shoes.

As people reached the top, we took turns taking the Potato Chip. Went twice to check both ways up and down. Then we socialized and explored other areas, climbing here and there and taking photos.

I was one of the last to leave because I wanted to make sure everyone was there. By then another large group had arrived. We were all a bit hesitant to leave and potentially forget someone, and that groupthink made us sit there waiting for no one to show up for a while. But in the end, we left. I haven’t heard of anyone being left behind.

The descent was slower than expected. The clouds cleared and people wanted to explore things along the way that they were too tired to explore on the way up, taking every opportunity to climb rocks and take selfies with the panoramic view of San Diego.

We then went to Philz Coffee. I hardly ever drink coffee, but thought I might as well give it a try. I had a latte because someone told me it was less strong: more like coffee in milk than milk in coffee. I burned my tongue.

A girl and I took a post-hike walk to campus. I went back to my dorm and shared my photos with the group discord.

Then I washed my clothes by hand in the sink and shower. They were muddy and I would feel bad for the next person using the washing machine if I had used it instead. Washing my hands gave me quite a workout, especially wringing them out. Now you know what to do if you ever want strong fingers, wrists and forearms.

I took a shower and hung my clothes under my bunk bed using metal clips. I’m an out-of-state student and came here with nothing but a backpack and carry-on so those were pretty much the only clothes I had. While I waited for them to dry, I attended The UCSD Guardian lifestyle meeting on Zoom in my spare underwear, took a nap, then started typing this article .