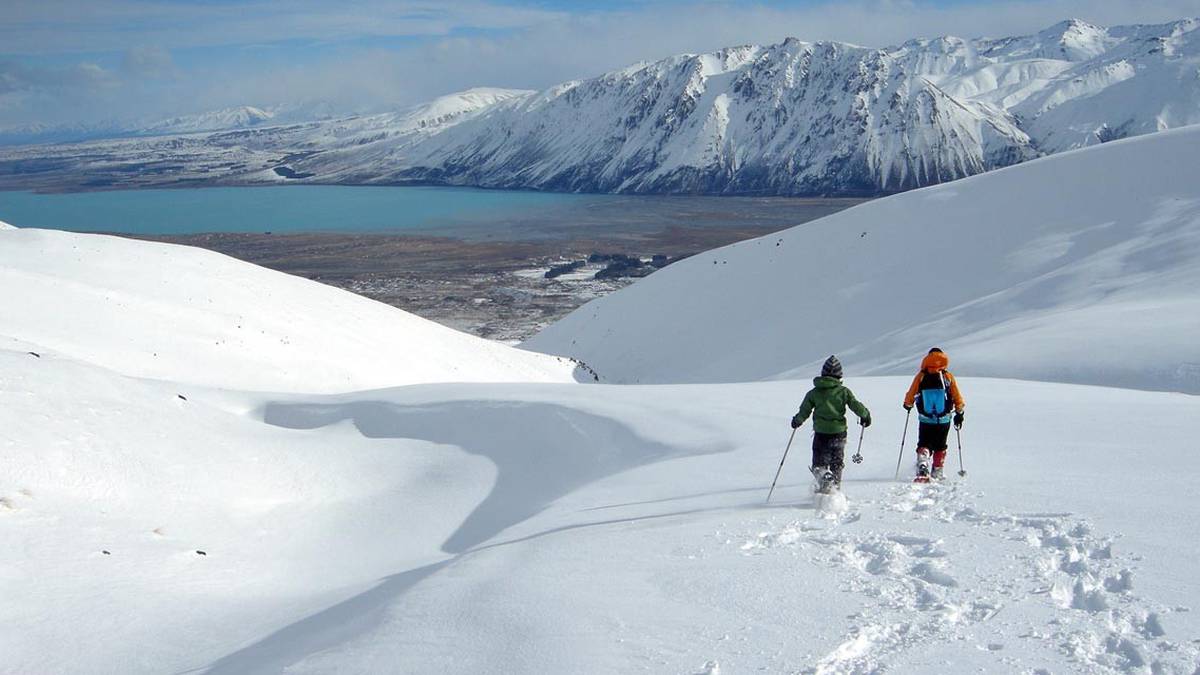 Skis and boards may rule, but there are other ways to enjoy the snow, writes Steve Dickinson

Everyone knows the two main winter sports: snowboarding and skiing. However, there are alternative activities in New Zealand’s alpine towns other than just making a snowman. Since there is snow, people have found ways to have fun on it. Here are some other ideas for making the most of what is shaping up to be a bumper snow season.

Very popular abroad, the snowshoe is starting to take root here too. It is a type of trampling that simply involves walking on snow, using shoes that shift your weight over a larger area. It has been around for thousands of years and is the original snow transport, with trappers and traders using snowshoes to traverse remote areas.

The basic snowshoe design is to shift weight, keep snow from building up on your feet, and give you some maneuverability. Traditionally these were just wooden frames with latticework rawhide lacing, but they have evolved over time with lightweight metals and plastics bonded to synthetic fabrics.

It is a relatively easy sport to learn and does not require any experience. Anyone who can walk should be able to snowshoe. It’s harder than walking, but it’s unique and you get to some amazing places.

Rent snowshoes at Cardrona’s Snow Farm and hike a one to two hour trail around the Pisa Range, or take a two to five day guided tour with Alpine Recreation to explore the Two Thumb Range above the lake Tekapo. Guided Walks NZ also offers a range of experiences including heli-snowshoeing in Queenstown.
snowfarm.nz
alpinerecreation.com
nzwalks.com/snowshoeing

Combining elements of alpine and nordic skiing, and named after a region in Norway where the activity originated, telemark skiers use a squat motion on alpine skis.

You don’t see a lot of telemark skiers these days, but at one time in New Zealand it was a very popular alternative to traditional skiing and was considered very retro, even hipster. It has an unusual cornering position that sets it apart on the tracks. Each turn is done with a side step and a movement of the knee towards the ski, like a curtsey.

As in other skiing disciplines, telemark also contains basic equipment such as telemark boots, special bindings and telemark skis, all of which can be hired.

One of the real attractions of telemark is access. Long pieces of synthetic fabric, called skins, can be attached to the bottom of skis, which can help you get up in the backcountry.

There are many similarities between telemark and cross-country skiing and both often fall under the banner of Nordic skiing. But cross-country skiers rely on their own propulsion to navigate snowy terrain, rather than using ski lifts or skins. They stride (classic style) or side to side (skate skiing), using their ski poles.

While experienced cross-country skiers can simply get out on the snow and travel anywhere, on some ski areas it is also possible to travel along rail grooves carved into the snow by a machine.

This form of snow fun looks a little weird, but it’s so much fun – it’s as easy as riding a bike, actually easier. They have been around for years and have become high-tech products. With a basic bike frame, the main difference is small skis instead of tires. There are many variations on how they work, steer, stop, etc., and again, not all ski areas allow them. But there are plenty of places that hire them and can advise you where to go.

If you go out in the snow, you have a responsibility to protect yourself. Relying on your cell phone is not enough. Ask for advice, get the right gear, and start with a guided tour to see if you like the activity and want to take the time to learn. Snow anywhere – off-piste, mountain, ski resorts – is great fun, but it should be treated with respect. For more information on snow safety, get tips and information at mountainsafety.org.nz

Check traffic light settings and Department of Health advice before traveling at covid19.govt.nz

A beginner’s guide to river surfing in Colorado

Inflation is the enemy of the paycheck to paycheck economy