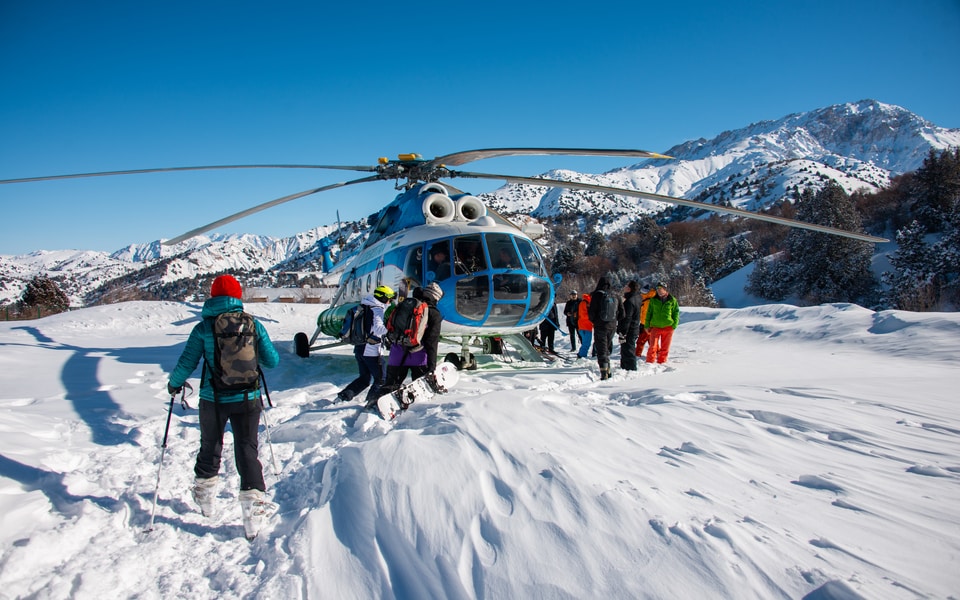 Skiing in Uzbekistan, the cold heart of the Silk Road

I remembered the sound of a helicopter, its blades pounding the air like a rabid dragon. What I didn’t realize, however, is that when a helicopter lands on deep snow, the force creates an explosion of ice and powder that rips your clothes and stings any inch of exposed skin. This continues until the blades finally stop. All you can do is snuggle up to the ground like a penguin.

Perhaps the experience elsewhere in the world is not so dramatic. But the current helicopter of choice for heli-skiing in Uzbekistan is a former military Mi8, a vehicle monster that would easily carry 16 soldiers with a full kit. Anything this size will move a lot of air and snow.

We walked through the door of the Beldersoy heliport, following the little ski guide Gregori Trebisovski and his colleague, Sergey Dolgiy. Gregori was the first heli-skiing guide in Uzbekistan, the first person to paraglide in the country and a pioneer of freeriding. He is known in the extreme sports industry as “The Legend of Chimgan”, and rightly so. At 68, he is still on the slopes of the mountain every day of the season. There isn’t a peak he hasn’t climbed, a ridge he hasn’t cycled, or a backcountry road he hasn’t explored.

But even for Gregori, our flight was a first. In more than 20 years of heliskiing, he had never had a British group. The point is, even though Russians and other hardcore skiers from the countries of the former Soviet Union knew that Uzbekistan has one of the best powder snow in the world, they kept it a secret.

The cat is finally out of the bag this winter with the opening of the brand new Amirsoy ski resort in the Chimgan mountains. The first part of a billion dollar investment program in the development of winter sports in Uzbekistan, Amirsoy is managed by PGI Management, based in Andorra. They have brought decades of expertise – along with more than 20 expatriate managers – to Uzbekistan to ensure the highest standards in health, safety and environmental practices.

Director of operations Thomas Thor-Jensen spent 12 years leading Courchevel in the Three Valleys in France before joining Amirsoy 18 months ago. Speaking of the outlook for the resort, he grew more and more animated: “The snow is very dry, and although it is hot during the day, it remains light and dry. Normally you only get this at high altitude. The snow here is better than in Japan. It is the best snow I have seen in the world… We opened on December 21st and every day the number of skiers increases.

The opening of Amirsoy has also given a huge boost to the heli-skiing operation, although its reach is well beyond the ends of the resort. Gregori estimates that he has already welcomed three times as many skiers this season as in 2019. Uzbekistan Airways (owner of the Mi8) also recognized the growth potential of the activity and in February ordered five brand new helicopters from Airbus, to be delivered later this year.

Let us return, however, to the belly of the beast. And “beast” is the right word: the Mi8 is big enough to stand upright, and so stable you can open the side windows in flight and stick your head out (but watch your contact lenses). It’s pretty much a flying bus.

We had perfect flight weather, the snow covered peaks stood out against a vivid blue sky with no clouds to see. Gregori guided the pilot to land at Ikhnach, 3,800 m above sea level. If you think that sounds weak, you are right: Mont Blanc measures 4,808m. But that’s one of the curious things about the gunpowder here in the Chimgan Mountains. It manages to fall thick and fluffy even in the lower valleys.

The helicopter cannot hang around the top of the mountain for long; there is a brief flurry of activity as the skiers are ejected, then the helicopter is in the air again. No two descents are the same: one guide leads the way, choosing the optimal route for the conditions, and the rest of the group follows in single file. In the Chimgan Mountains, the peaks are not steep and the snow is so deep that the rocks are generally well buried. We were well above the tree line so obstacles were minimal.

Nothing beats the thrill of running on unspoiled powder. Beyond our group there was no one else for miles. Even birds were rare. The mountains seemed to stretch out forever in all directions, and unlike the Alps, the landscape unfolds: there are no walls of ice and rock obscuring the view.

The starting point of the race was on a frozen lake about 2,500 m away. The helicopter was waiting. Even here the snow was several feet thick on the ground. It was too dry for snowballs, but perfect for diving head first from the side of the helicopter. With a radiant sun flooding the mountain basin and sheltered from the wind, we played like children, laughing with joy, before taking off again.

At the end of the day, I was exhausted, ready to collapse into a heap. But the members of the Uzbekistan Meteorological Society, on a team building weekend, had something else in mind. Après-ski in Uzbekistan may be in its infancy, but the traditions of hospitality date back to the days of the Silk Road. Our evenings merged, bottles of vodka appeared, and I lost track of how many toast we drank. We drank to our hosts and to Anglo-Uzbek friendship. We drank the women, the president, the mountains and the snow. I also drank in the future, as the winter sports tourism industry in Uzbekistan is undoubtedly about to explode.

Asia Adventures (www.centralasia-adventures.com) offers a one-week heliskiing package in Uzbekistan from £ 3,525 per person. Return flights from London to Tashkent with Uzbekistan Airways (www.uzairways.com) start from £ 430 return.

What is a direct student loan and how do you qualify for it?