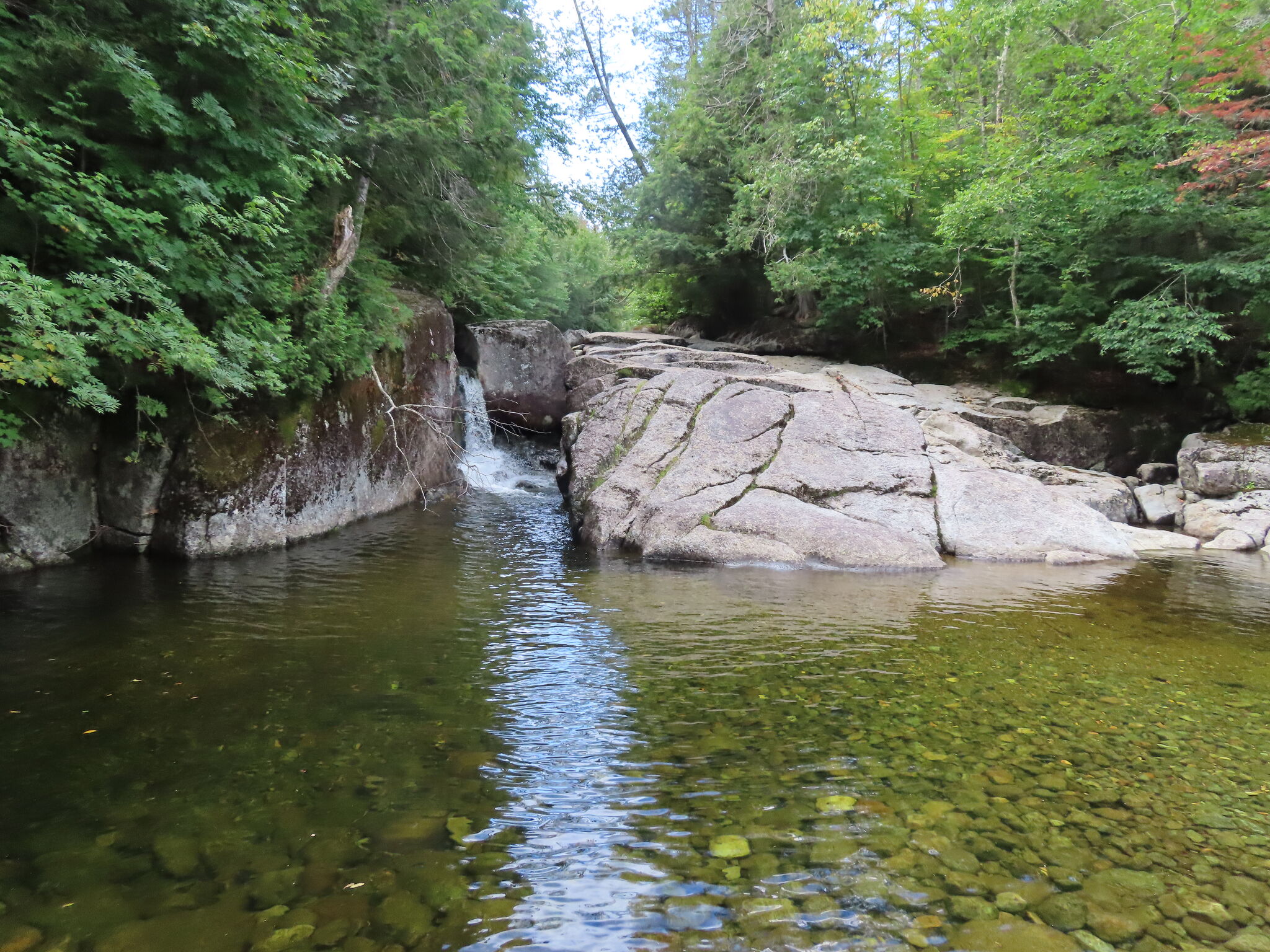 I didn’t realize how much I missed walking in the woods until we got back to hiking after a summer break. The blistering heat we’ve had over the past month has kept us well off the hiking trails and on our bikes, where the breeze from our speed and ability to slide (vs. the constant motion of walking) has left us moderately chilled .

The downside of cycling is that at higher speeds you miss some of the little details that make the woods so beautiful – mushrooms and wildflowers, caterpillars and moths, even animal droppings that tell a story about who lives in the woods and travels some of the same trails as you.

Our return to hiking was not without problems. We started in the High Peaks area after a night of camping. Didn’t tell our 12 year old that I was hoping to climb a high peak, one of 46 mountains in the Adirondacks with a peak over 4,000 feet. My husband, Herb, thought it was a really bad idea, but I thought a little obfuscation was worth it. (It wasn’t my greatest parenting moment.) I wasn’t lying, I reasoned, but I wasn’t telling the whole truth either. Yes, it’s a mountain, I tell the child. No, it’s not very long.

“It’s only seven miles round trip,” I said encouragingly. But our child is not dope and quickly understood the right question to ask: “Is it a High Peak?”

When informed of the whole plan – to climb Wright Peak from the Adirondak Loj trailhead – the child flatly refused to go. We decided to hike to Avalanche Pass instead. It’s not a high peak, but it’s in the High Peaks region, and took us past the beautiful meadow at the site of the old Marcy Dam and along Marcy Brook, two of my favorites .

We hiked about a mile past the mars dam when the kid started complaining of sore feet. A quick glance showed one of the dangers of infrequent hiking: blisters. I pulled out the first aid kit and played doctor mom. It helped, but we quickly turned around as Herb continued towards the lake.

Once we turned around, the kid became positively chipper and bounced around the track. I was sorry to have turned back, but having abandoned a destination, we had the freedom to lollygag. We had stopped at the creek above the old dam on the way for a snack, enjoying the view of the peaks surrounding the now drained pond. On the way back we stopped under the old dam, under the bridge that takes hikers across Marcy Brook. As people walked above, their boots pounding the wooden bridge, we chatted about school and friends and admired the insects skating above the water. On the surface, their legs were slender, but the way the light refracted off the water made their shadows on the creek bed large and round.

The next day we found more broken sneakers and forced a hike to Rocky Falls, a small waterfall on Indian Pass Brook. It’s only two miles from the Loj trailhead, but by the child’s dramatic limp, you’d think he was 20. We pretended not to notice it and the limp quickly subsided .

The rock falls aren’t very high, but they are very Adirondacky – cold water rushing over large gray slabs of rock, with an inviting deep pool at the base. It wasn’t warm enough to swim, but we lay on a small beach, admiring the variety of colors of the pebbles that lined the pool, choosing our favorites to line up on top of a rock. They looked better in the water, though; once dry, the vividness of their colors faded.

The sun and temperatures said late summer, but we found the first signs of fall: a few bright red maple leaves scattered on the ground. Wildflowers, too, told us what season it was. Gentians grew in the shade along Indian Pass Creek, and in the open areas there were goldenrods and jagged asters.

On our hike to Marcy Dam the day before, we had seen dozens of hikers. By comparison, on the Indian Pass trail, we only saw two groups of hikers all morning. As mine had been the day before, it seemed like most people’s attention was focused on the peaks. I was happy (in the end) to slow down and admire the details instead.