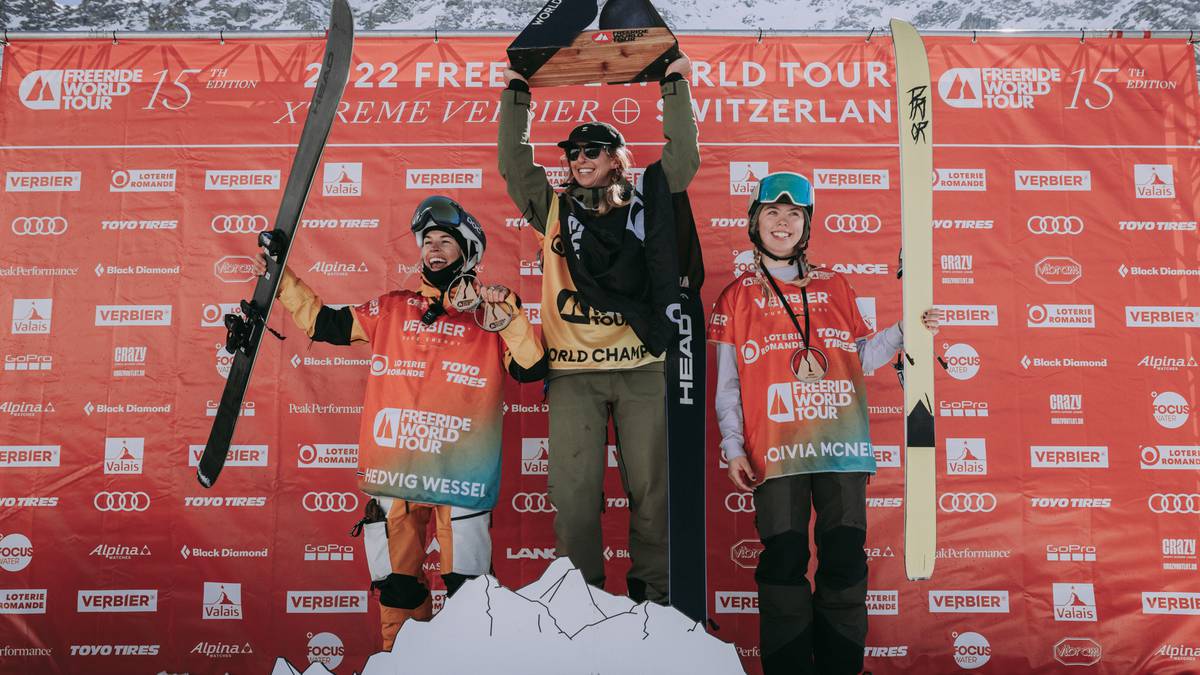 Ohakune’s Jess Hotter is now the freeride ski world champion. She spoke to journalist Jacob McSweeny about the psychology of getting up after a big crash as well as how she got into the sport.

She may be a world champion, but Jess Hotter still has nerves when she’s about to race down a mountain at high speed.

Hotter was crowned the Freeride World Tour ski champion at the end of March after her wins in previous competitions were enough to hold on to the top spot.

Heading into the final competition in Verbier, Switzerland, Hotter held a solid lead over Danish skier Hedvig Wessel thanks to wins at Fieberbrunn in Austria and Ordino-Arcalís in Andorra.

Hotter also finished second in the Freeride World Tour event in Canada. There were five rounds of competition in total in Spain, Andorra, Canada, Austria and Switzerland.

Wessel could only manage a second-place finish in Verbier, meaning she finished 2,500 points behind Hotter, who had a big crash in the last meet.

“I got caught as I was taking off on the main air I was doing in the middle…I caught some rocks on take off and it tipped me forward over the cliff so I landed on my side and face,” Hotter mentioned.

“I hit my head pretty good…that was way later. I hit my head hard enough on the side of my face that my vision was blurry for about a minute.”

Hotter said the face she rode in Verbier, the Bec des Rosses, was familiar to her after checking it out two years ago.

“Coming into the competition, I was very, very nervous,” Hotter said, thinking she might not have felt that day.

“I’ve always been very scared of the Bec,” she says.

“If you get it wrong, there are cliffs you could fall down and you know, kill yourself or go to hospital with it.”

Hotter said being declared world champion after an accident was a strange feeling.

“It still doesn’t feel real. I don’t really know how to describe it. It’s like I finally got to this point that I never expected to get to and… I’m still processing it, that’s for sure.”

The fame that came with his title had also been a little strange for Hotter.

“I’ve had a few people come up to me and ask if I’m Jess Hotter and it feels a little unreal…it’s kind of funny.

“It’s really weird that people know who I am.”

She said that although her sport was a niche sport, it did not get the recognition it deserved in New Zealand, given the success of freeriders there.

“You see rugby on the news every night, but you don’t hear so many things that other athletes are doing around the world. And it’s not just freeriders…in other sports as well.”

She said it wasn’t too long ago that New Zealand freerider Sam Smoothy was winning competitions and he wasn’t really mentioned in the media here.

“It’s a niche sport but…we have a really, really high percentage of Kiwis in the Freeride World Tour.

“Last year we had seven Kiwis out of 50 runners and if you think about the odds of the whole world having seven out of 50 athletes from a country that has what…five million people at the bottom of the world that don’t get as much snow as other places.”

Hotter is now in Fernie, Canada “skiing for fun” and preparing for the upcoming season.

“I’m just having a little fun on the skis without too much pressure.

“And give the body a chance to heal too because it’s definitely a little painful.”

The world title has been a long time coming for Hotter. She has been skiing since she was 4 years old and has spent years working out of season, often every day, to give her the opportunity to train and compete during the season.

She thanked her parents for their support during the difficult times she went through trying to qualify for the round the world race.

“To be honest it was pretty hard on them too. I was coming home in a not very happy state after leaving Canada to come back to New Zealand knowing I was going to work every day – as much as I can to save money.”

“They’ve always been there for me.

“They were thinking during that time if it was something I should do or how long I should consider doing it before they decided to give me a little break.”

She became interested in freeriding when she was 17 and heard about the Xtreme ski event being held in Whakapapa.

“I wanted to take part and I wasn’t allowed because I was 17 – I was too young to do it.

“Then when I was 18…I had mock exams for high school that week so I wasn’t allowed to, my parents wouldn’t let me go.”

What followed was traveling and working in Canada for a year as well as trips home to work in his hometown Ohakune as well as frequent trips to and from Queenstown.

It was only in Japan that she met a former freeride coach and he suggested she give it a shot.

“That’s what pushed me to participate in my first freeride competition.”

She said it was scary then – “but it’s scary even now”.

“Part of it is taking calculated risks relative to your experience and ability and hoping it works out.”

She said she really enjoyed the adrenaline rush.

“I find it’s kind of like a meditation, I guess, going into what we call flow state, where you just operate in automatic mode. Your brain shuts off and you do everything automatically.”

Conquering freeriding for Hotter has been about leaning into the “nervousness” she experiences when looking at a mountain.

“Obviously you’re scared of crashing or getting hurt, but it all comes down to your ability versus the conditions versus the size of the things you’re jumping on and deciding what your chances of success are.

Hotter accepted the possibility of having a serious accident – and she had her fair share.

On those occasions, she had to work hard to regain her confidence.

“You have to do it on the spot there – you’re in the middle of a face that just crashed, you’re not just going to say ‘shit, I’m not putting my skis back on, I’m out of here’.

She said her big crashes usually happen on backflip attempts.

Her competitions are funded by contracts she secures with Freeride World Tour as well as support from sponsors Head, Mons Royale, Pieps and Snowcentre in Auckland.

Hotter said she plans to return to New Zealand in three or four weeks before preparing for next season when she tries to defend her world title.

“I have to try to defend this title and it’s quite scary.

“There are some amazing, incredible athletes coming out of qualifying next year and it’s going to be quite a hectic competition I think.”

You can go surfing in the desert in 2023

Why Tax Refund Loans Are Bad: Fees, Interest, and Risk