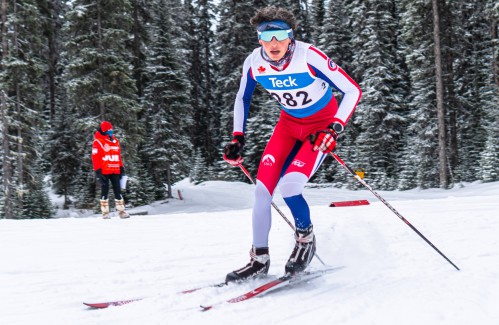 The (until recently) Amherst resident attends Stratton Mountain School in Vermont, where he and his teammates, including Northampton’s David Shycon, train year-round with special focus during the winter months.

His father, Steve Bruner, skied in high school in Minnesota and taught Micah the sport when they lived in Montana. Steve Bruner manages the Stratton Nordic Center in Vermont.

“During the races, it’s a maximum effort, a painful trying experience,” said Micah Bruner. “But it’s awesome and it feels like flying.”

Although Bruner originally attended Amherst Regional Middle School, the family moved to Stratton before he entered eighth grade last year. His mother, Leah C. Schmalzbauer, a professor at Amherst College, was on sabbatical, so now seemed like a good time to try it out. While some of his classmates stay in the dorms, Bruner remains a day student. Her younger sister Zola will participate in SMS next year. The family still owns a condo in Amherst while Schmalzbauer commutes a few days a week.

Shycon chose to leave his family and friends behind in Northampton to pursue the sport more seriously. He started coming out of kindergarten with the Berkshire Trails program at Notchview Reserve in Windsor. Shycon attended the Bill Koch League festival and enjoyed it, so he signed up for more races the following year.

“I think I had several races where I came dead last. One practice a week wasn’t enough to compete with those kids in Vermont and the kids in New Hampshire and Maine,” Shycon said. remember my first race that year, I came in last and bawled my eyes at my mom for five minutes, ten minutes probably. I just wanted to improve. It’s just my competitive nature.

He joined a Weston team in sixth grade but always had his eye on Stratton. Shycon attended summer camp there in fifth grade and begged his parents to attend school in high school. He went to Northampton High School for his freshman year and found friendship and community in the cross-country running team. When the COVID-19 pandemic started, his father, Robert Shycon, told him he wouldn’t get the same value by going to school in Northampton, so he could try texting.

“It made my decision ten times harder than it would have been years before,” David Shycon said.

He had to leave his family and his new friends. Texting Dave Reinhardt, then Northampton coach, to tell him he wouldn’t be coming back to race next year was the hardest part. Now he has spent two years there and recently completed his freshman year. The schedule focused on skiing and school work sometimes irritates him.

“I wouldn’t necessarily say I liked having him so regimented, but it’s definitely for the best,” Shycon said. “Often, especially after last season, I was a bit exhausted. I thought, ‘wow this is so focused. Can I have a normal life for a little while? That’s not what I’m here for. .

This is not to say that school is just a job and not a game. It also offers other sports like football in the fall and baseball in the spring, among others, which Bruner and Shycon participate in. Shycon even played a few lacrosse games when they didn’t have enough players.

“It takes away some of the tunnel vision,” Shycon said.

The dedication paid off for both, as they competed at the USA National Junior Cross-Country Skiing and Snowboarding Championships in Minnesota in March. Bruner finished third in the boys U16 freestyle discipline and was named to New England’s elite development squad. He wants – albeit with ambition – to participate in the senior national championships this season and qualify for the U18 team’s trip to Europe. Bruner is also aiming to repeat on the podium at the junior nationals.

Shycon finished 27th in the U18 classic race and 35th in the U18 freestyle competition. Next year, he’s aiming for All-American status with a top 10 finish. His college plans are also forming. Shycon is considering Vermont, New Hampshire and the state of Montana to pursue his skiing career.

“I want to work as hard as I can to be back here next year and even do better so more people notice I’m here,” Shycon said.