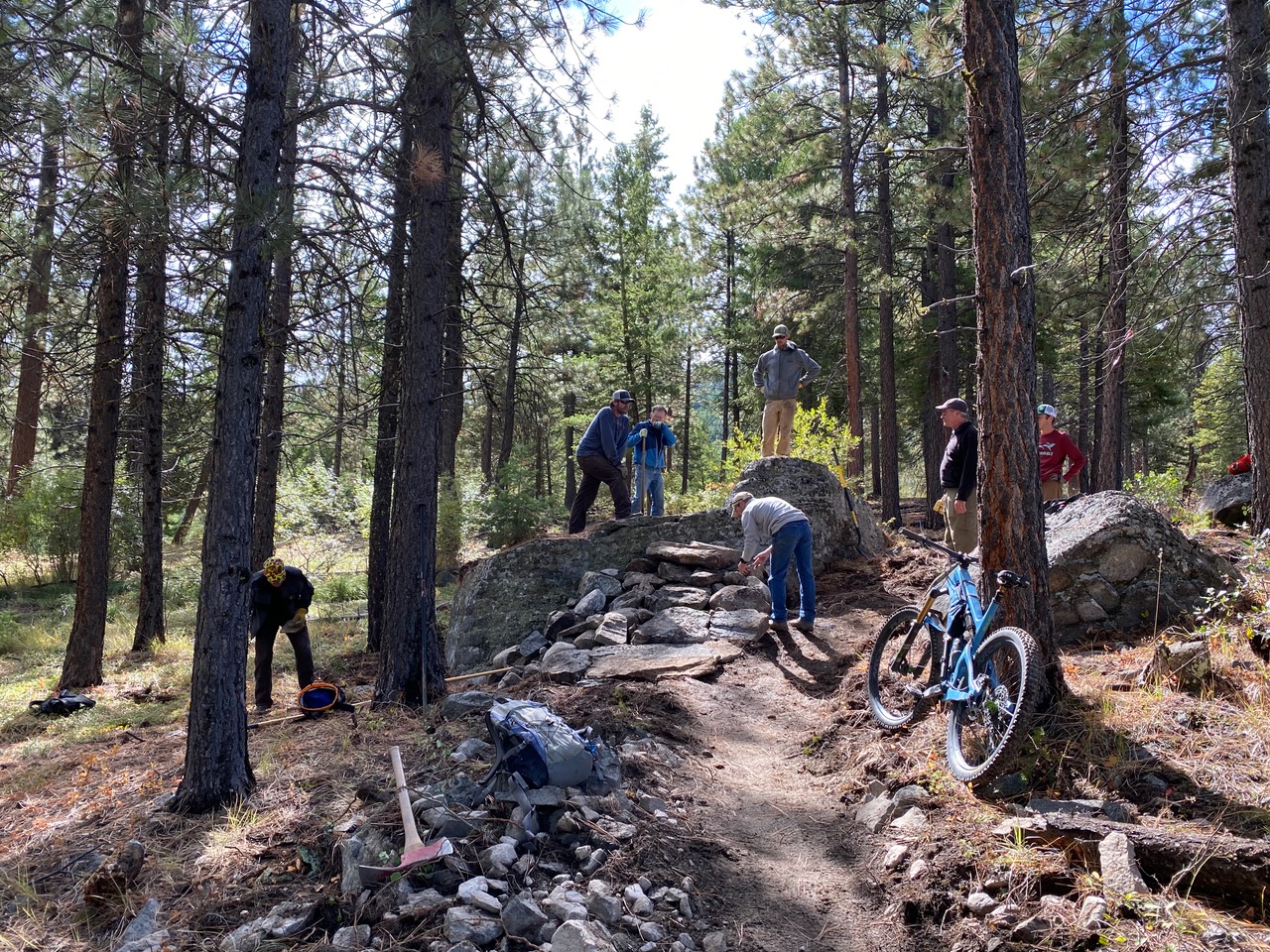 Snow was still swirling on the towering peaks above Lake Como in Montana as Jeff Kern, president of the Bitterroot Outback Cyclists (BBC), prepared to lead a group hike on a network of ridge trails above the lake.

“The trails we’re going to ride today are a lot rougher than the ones we’re building on the south side of the lake,” Kern told me as we chatted under a shelter at the Site of the Three Sisters group in the Lake Como recreation area with other members of the BBC.

Falling temperatures near the lake hovered in the low 40s, and only a handful of BBC members had turned up for the previous night’s campsite and subsequent morning group hike – which would be followed by work on the trails ‘Kern’s Turns’ later in the day.

Used informally and with a slight air of reverence by all members of the BBC, the name “Kern’s Turns” refers to a network of mountain bike trails on the south side of Lake Como that Kern and a team of dedicated volunteers have meticulously developed over the better part of a decade. The United States Forest Service calls these new trails the “Bunkhouse Trail System.”

Later in the afternoon we would all shoulder McLeods and Pulaskis and head to the south side to ‘butter’ some of the newer trails in the Kern’s Turns system after the ravages of a long winter and some postholing horse hooves. had taken their collective tolls. But for now we were heading for a steep ridge just north of the lake.

As Kern had mentioned earlier in the morning, the trails on the north side of Lake Como – Jenny Ridge and Lick Creek – are rough, but great fun, even for a rider of my very limited skills.

More than once I’ve been compelled to watch the most capable members of the BBC navigate their way up steep inclines that, to me, required a complete disassembly and a haughty hike to the top.

For most of the ride, however, I remained firmly planted in the saddle, and at one point I looked up at sweeping views of Lake Como framed by the towering El Capitan, which rises to 9,924 feet above sea level.

Lake Como sits at the southern end of Montana’s Bitterroot Valley. Approximately 90 miles long, this wide valley is traversed by the trout-rich waters of the Bitterroot River. A steep cul-de-sac known as the Bitterroot Range juts out over its western edge as the forested foothills and snow-capped peaks of the Sapphire Mountains roll east. From nearby Hamilton, an hour’s drive on Highway 93 leads to Missoula, Montana.

As we approached the Jenny Ridge lookout, I was enlightened, by fellow BBC members, to the nuances of the Bitterroot Valley mountain biking scene.

“Mountain biking opportunities are a little harder to come by here in the Bitterroot than in other parts of the West,” a BBC member who had attended camp the night before told me as we stop to take in stunning views of the Bitterroot and Sapphire ranges. “We have great riding, but a lot of it is technical, and you’re going to share a lot with the horse people. Trails specifically designed for mountain biking were virtually non-existent before we started on Kern’s Turns.”

Kern and his team first proposed the new trails to the Forest Service in 2013. Since then, they’ve installed a series of mid-level stacked loops with thrilling drops and carefully placed berms that meander through about 20 miles of forest dotted with pines. . It is the only purpose-built mountain bike trail network along the Highway 93 corridor, which stretches from the Idaho border near Lost Horse Pass all the way to Missoula.

“It took a lot of work,” Kern said. “Before we even innovated on the trails, we had to work closely with the Forest Service to get approval. There’s been a lot of behind-the-scenes work to secure funding, but we’re finally getting closer. We only have about four miles left to build.

Much of the funding that Kern and other BBC members have been able to secure has come from state recreation grants, such as the Montana Trail Stewardship Grant Program. Grants like this recently helped the BBC hire the trail-building services of a small excavation company near Darby, Montana.

“Before we had the shovel, we were doing everything from scratch,” Kern said. “The excavator has helped get things going, but there’s still a lot of smoothing and finishing to do once the excavator has put in a new section of trail.

After the morning ride on the north side of the lake, we head south to a section of Kern’s Turns called Waddell Creek Trail. This is where the ingenuity and dedication of Kern and the other volunteers really began to shine.

At the Waddell Creek trailhead, Kern opened the back hatch of his Subaru to reveal a wide array of trail-building tools. One by one, the BBC members happily hoisted the big tools up and fanned out to score points along the trail.

I followed a member named Josh as he began raking post holes left by horse hooves with the confidence of someone who had done the task many times before. Josh sunk his own personal McLeod into the ground and lamented the damage horses tend to do to newly constructed trails like the Waddell stretch we were working on.

“Sometimes I think horse people ride these trails without even knowing that we just put them in place and we’re working all the time to clean them up and smooth them out,” Josh tells me. “What can you do? All of these trails are multi-purpose and they have a right to be here too. I think it will be better once the trails stabilize and the dirt is more compact.

As I continue to clumsily wield my own McLeod, Kern’s wife, Jessica, seems to tell us that a new berm is being built further down the trail. I head in that direction, joining Cynthia and other members of the BBC in search of rocks that we will eventually use to buttress the outer edge of the newly constructed berm.

“Before trails were ever built, I’d come here with Jeff, and he’d show this or that area where he envisioned a through trail,” Jess told me, as we were a group ready to haul a large boulder to the remote berm with a solid rock sling. “I could never do that. I just couldn’t imagine the best placement for a trail that didn’t yet exist, but Jeff has a real knack for it.

Once we had nested the boulder into the side of the new berm and concealed it with several buckets of fresh dirt, the day’s work was done. The Waddell Creek trail was now smooth and buttery, the smooth transition provided by the new berm felt inviting, and I found myself increasingly looking forward to a return trip – once the dirt set in of course – to try my hand at Kern’s Turns.

Deeper than creating a new feature on a brand new network of trails in a setting as fascinating as the Bitterroot Valley, however, was the sense of collective achievement that pervaded the BBC members as they returned at the start of the trail. There’s an undeniable sense of belonging that one gets after investing time and physical effort into a project like this, and these folks have spent countless hours swinging Pulaskis and McLeods, hauling buckets of five gallons full of dirt and rock, and hoisting rocks up and down hills in an effort to make Kern’s Turns a reality.

According to Kern, work on the trails will probably never completely stop. There will always be places to smooth out, new berms to build, and a need for subtle improvements that future rides will no doubt reveal.

“We’re always looking for ways to improve the trails,” he said. “But for now, we’re pretty proud of the progress we’ve made. It will be a great asset for the whole community.