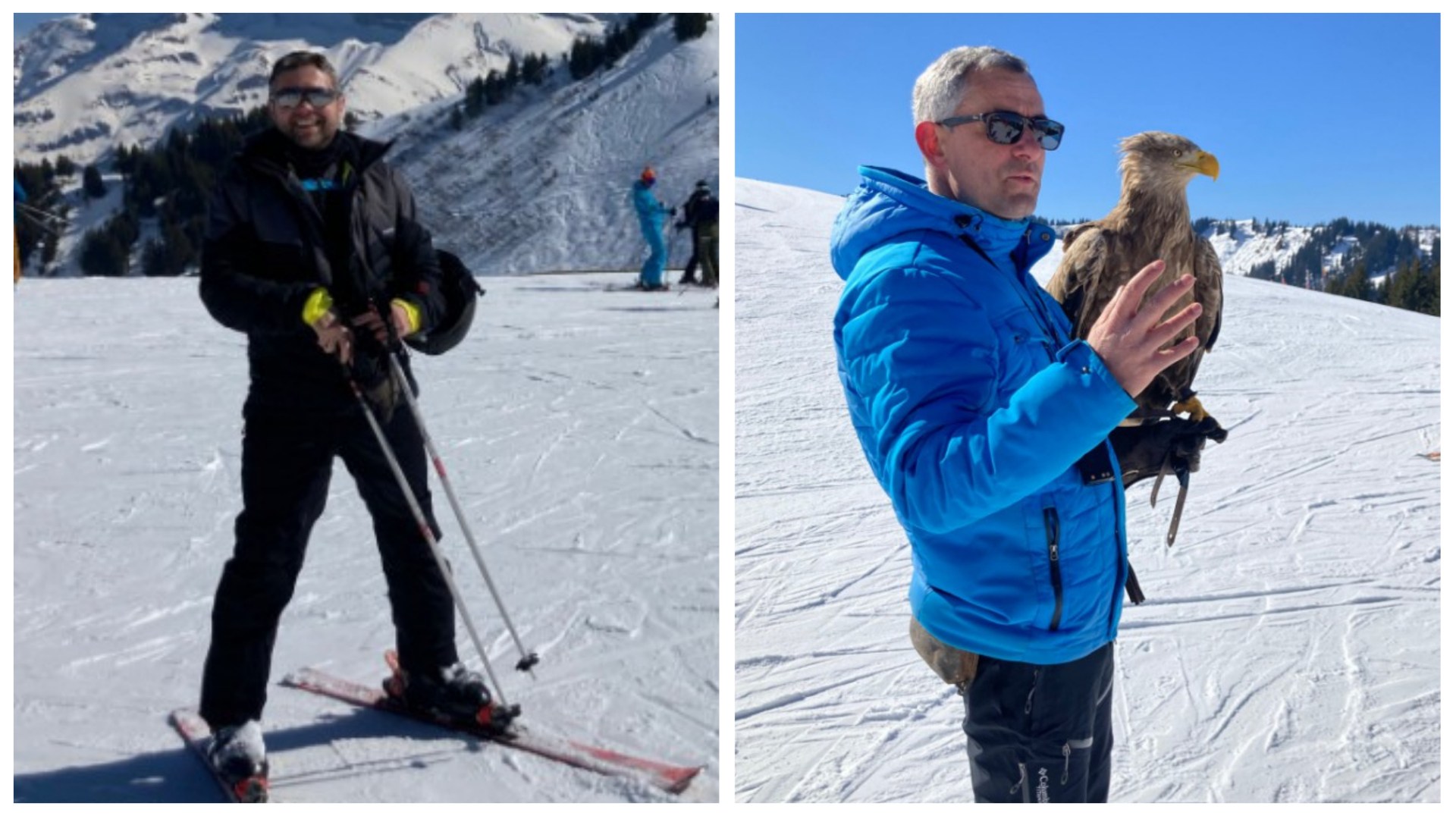 NOW, here’s a vacation activity that’s really ready to take off: skiing with an EAGLE.

The once-in-a-lifetime experience is offered in the French Alpine resort of Morzine, where a local conservationist aims to reintroduce the magnificent predators – which have a wingspan of over 6ft – into the skies.

And unlike the brave, but ultimately hopeless, 80s English ski jumper Eddie the Eagle – Fletcher the Eagle is the real deal.

The 12-year-old white-tailed eagle took the drag lift to the top of the piste while patiently sitting with his handler Jacques-Olivier Travers. We then raced down the slope as Fletcher dove and hovered majestically above us before landing gracefully on his owner’s arm.

It was truly a privilege to see this beautiful bird in action, returning to the Alps where it was hunted to extinction over 150 years ago.

I had an even closer and more personal experience when Fletcher was encouraged to land on my own arm – protected by a tough leather falconry glove – with the help of a tasty treat.

For such a large animal, it was surprisingly light, weighing only 4 kg thanks to those avian bones.

Afterwards, Jacques-Olivier revealed how the eagles are making a comeback in France with a little help from Scotland.

This was after they came into contact with naturalist Roy Dennis who helped reintroduce the giant birds to the west coast of Scotland in the 1970s – it is now estimated that there are 150 breeding pairs in the country.

Jacques-Olivier said: “I am often in contact with Roy, who gave me so much advice because he reintroduced something like 200 birds.

“His success and experience from Scotland, including GPS tagging, will help here in France. We hope this will help increase the success rate when we release the eagles into the wild here.”

We were at the recently renovated family hotel Névé. It was a bit of a hike from the main lifts, but well worth it thanks to its relaxing spa – great for soaking those old bones after a day on the slopes.

The buffet breakfasts were delicious, the staff super friendly, and the ultra stylish rooms had balconies, giving you a perfect view of Mount Nyon eclipsing the city.

Being in the heart of the Alps, there were more restaurants than you could shake a wand with.

The first night we dined in a boutique hotel called The Farmhouse – one of the oldest buildings in Morzine – where the set menu and simple choice of red or white wine took away the dilemma of trying to negotiate a menu .

The following evening we dined at La Chamade, a bit more formal, specializing in tapas and wood-fired pizzas, as well as having an excellent wine list. But the liveliest vibe was undoubtedly the Bec Jaune Gastropub, which uses only local, organic ingredients.

Their braised prime rib with carrot, kale and hazelnut was perfectly washed down with a few brilliant beers from his on-site microbrewery.

Of course, we weren’t just there to eat and drink, that’s a shame, but also to ski. Being in Morzine gives you access to the entire Portes du Soleil ski area.

And what an area – it’s vast, with 208 lifts on 600km of pistes, connecting 12 resorts and even allowing you to ski across the border into Switzerland.

Being thousands of feet in the Alps too, the skies were blue and the sun blazing, giving this Scotsman his first ray of sunshine after several cold, dark and stormy winter months back home.

And just like in Morzine town centre, there were also some wonderful mountain restaurants to choose from.

We stopped for a long lunch at La Cremaillère in Lindarets where we were able to enjoy their large open terrace and menus filled with their specialty – local mushrooms.

It was idyllic and a real highlight of the trip, sitting in the rustic restaurant in the hot sun as the skiers zoomed by.

Even though I thought I had nothing left in my legs, in the evening we had an experience on snowshoes as we went hiking in the mountains at dusk with our guide Hervé.

It offered a serene calm after a day of hurtling down the ski slopes, as Hervé chatted about the local wildlife before stopping us for hot van – mulled red wine – and the local sausage, saucisson.

Our guide then gave us a lesson in the night sky, pointing the planets and consulting with a powerful laser, ending a great evening with his unique light show.

But if the legs aren’t ready for hurtling down slopes or climbing snowy trails, you can always try the ancient Japanese art of forest bathing, known as shinrin yoku.

There are sessions led here by Simone Simpson – a bundle of energy from Wales – who is known locally as the ‘wife sitter’ as many women choose to join her meditation services while their husbands run down the tracks.

To be honest, I didn’t expect to get much out of this activity, as I’ve never been very attached to trees.

HOW TO GET THERE: EasyJet flies from Edinburgh to Geneva throughout the ski season. See easyjet.com

MORE INFO: A six-day ski pass costs £250 per adult for the Portes du Soleil region. Ski with an eagle then have lunch at the same place at the Pointe de Nyon restaurant on the slopes. The price is £65 per person. See lesaiglesduleman.com

Ski with an eagle then have lunch at the same place at the Pointe de Nyon restaurant on the slopes. The price is £65 per person. See lesaiglesduleman.com.

For forest bathing with Simone Simpson see Magicalsnowtreks.com and for snowshoeing with Hervé see morzine-avoriaz.com/morzine/snowshoeing

But, after just 15 minutes of silent contemplation beside an ice-covered river, my eyes were streaming with tears about my recently deceased mother.

We finished with a delicious cup of nettle tea and all was well with the world again. I had come to ski, but I left in spirits higher than an eagle.