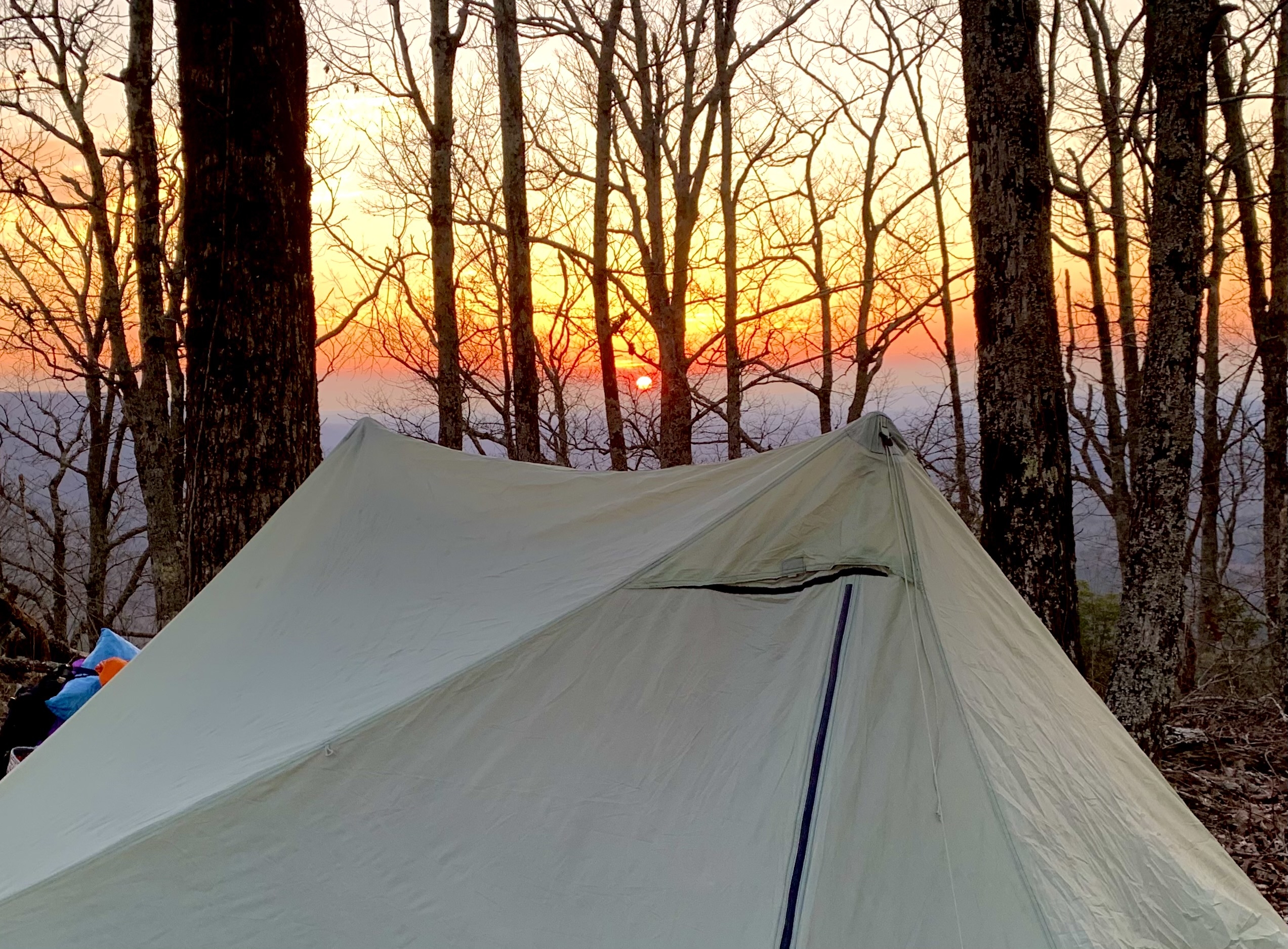 Hiking plans; When everything changes

This article is a follow-up to my hike in March. Since then, life has taken a little turn, so it took a while for me to “get back to it”.

If necessity is the mother of invention, then Murphy and his hellish laws are the father of well-designed hiking plans.

The second day on the Pinhoti started before sunrise. My tent was pitched along a cove around mile 12 NOBO, and I sat inside, a door open to the sun.

The road out of the camp was a mile and a half to Terrapin Hill, and most of it was completely hidden under several inches of pine needles. If it weren’t for the light blue flames and the Guthooks you’d never know was a trail, at least not so early in the season.

I soon discovered that there was sometimes fist-sized stone under said needles, and rolling my ankles became the theme of the day.

The Pinhoti purges. Never underestimate the challenge of Pinhoti.

The trail descends from the ridge towards mile 14 and you descend into what would be a green tunnel if it was later in the year. In March The Pinhoti is still a dormant forest, and the sun can be relentless.

Most of the time the terrain was dry and looked barren except for a few patches of bamboo or rhododendrons on the north-facing slopes. Other than the pines, they were the only green I would see on this trip.

Eventually I ended up on County Road 56, which is a short walk from Highway 21, where I took a break and waited for Old Gregg. It was his job to get me through town to the next starting point, which I’m sure some people will consider cheating. The thing is, I hadn’t planned on being in Alabama, let alone the Pinhoti hike.

Alabama is where I ended up after plans to spend the winter with the family in Florida called for a sudden change a month later.

Sometimes family can be a blessing, other times a challenge. Like when this family relishes a lifestyle that involves heavy drinking and nudity. Walking around their small town for a 2am burger naked was totally acceptable. I did not know ; consider me enlightened.

To each his own.

After pushing TA for another year and deciding to find a new place to spend the winter, the Gulf Coast waved and we responded readily. It was paradise, but we could only stay at the RV park until March 1st because that’s the availability they had. 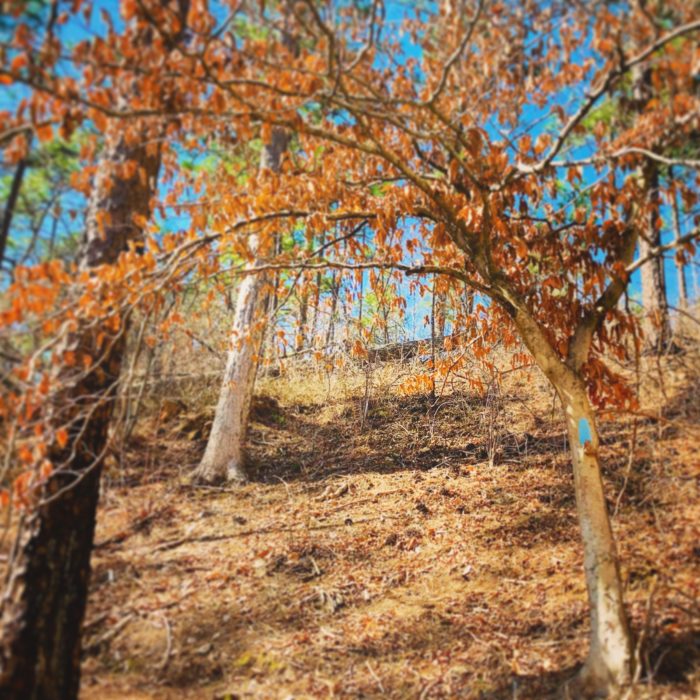 The Pinhoti in March strangely gives the impression that everything is uphill.

However, northern Wyoming is still an arctic popsicle in March, so I decided to burn a month of hiking northern Alabama on the Pinhoti. I was able to find a RV park with room for a month and Old Gregg (OG) was ready, although we still had to be out west the first part of April for his job. It would be a hike with a schedule and no wiggle room.

This is where the phrase “Do your own hike” Between. I had a limited number of days to hike, and had to descend a few times to watch the doggos while OG took care of the work. I wasn’t sure I could cover the entire distance, so we agreed that OG would take me through the long stretches of road.

It wasn’t perfect, but spontaneity rarely is.

The Trammel Trailhead is at mile 29. I bid farewell to OG and the dogs there. Shortly after, I ran into a man cleaning the trail of windfall and he informed me that extreme weather conditions were setting in quickly.

It was news to me. He then asked me if I had an emergency exit strategy.

He gave me a long, evaluative look. “Consider a plan B. See those downed trees? ” He asked.

I nodded. I had been pushing them around most of the day.

“The same kind of storms that caused this will be here in about thirty-two hours. Find your plan B. “He then resumed attacking one of the many trees lying across the path with an ax.

An axe. This trail is going to be a challenge for a while, folks. FOR YOUR INFORMATION.

I finally made it to camp, where an almost incredible sunset entertained me while I had dinner. 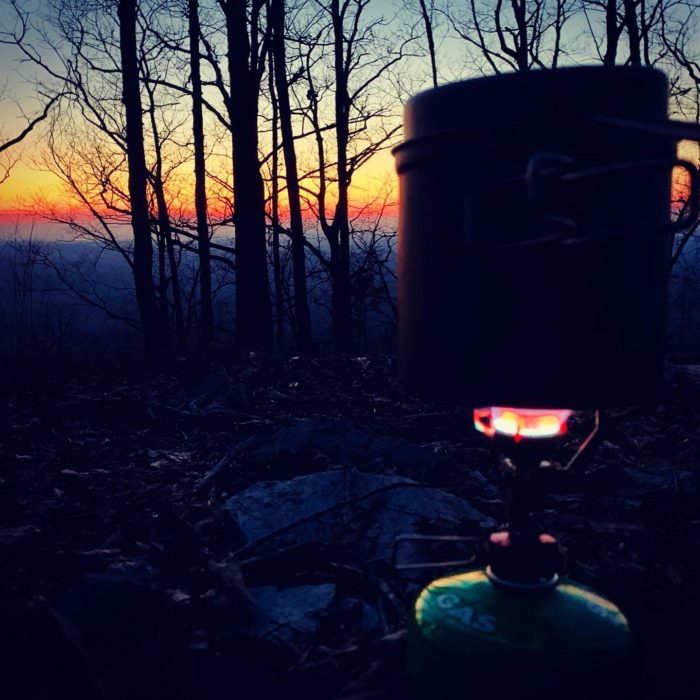 A late dinner on the Pinhoti.

By early evening the next day, I had fallen after climbing another rumbling tree, and straightening up and untangling my bag, I walked over a rock covered in pine needles. Things rolled around.

Let me clarify “rolled”. It wasn’t broken. There was no snap followed by a fall to the ground and a twist of pain, but the loud noise and the inability to walk fully upright assured me that I had to rethink my strategy.

Two hours later I had hindered a mile on a dirt road cutting the trail between Bull’s Gap and Porter’s Gap. I was near mile 50, and there were still plenty of miles to go before I reached Porters.

The difference between risk-taking and recklessness

At times like this, you have to be realistic. Although I have taken risks on a hike before, I am not reckless. My ankle was messy and I wasn’t getting the mileage I needed.

I also ran out of water quickly, and the next spring was many miles away. To my west, the sun was low on the horizon.

I rarely had cell service on the Pinhoti, and at this junction it was no better, but one thing I did have was a Zoleo brand PLB with satellite texting capabilities.

I sent a “Not dead. Ankle bearing. No big deal, need extraction – 4WD required”Text with my coordinates, and settles for the arrival of OG.

The short version of the events that unfolded after he finally found me is as follows.

In the morning I was still because of my ankle, and the new RV park near Ohatchee, AL where we were staying, warned that we had to clear due to the impending weather situation.

For those who aren’t up to date with what’s going on in Alabama in March and April, a word. Tornadoes. 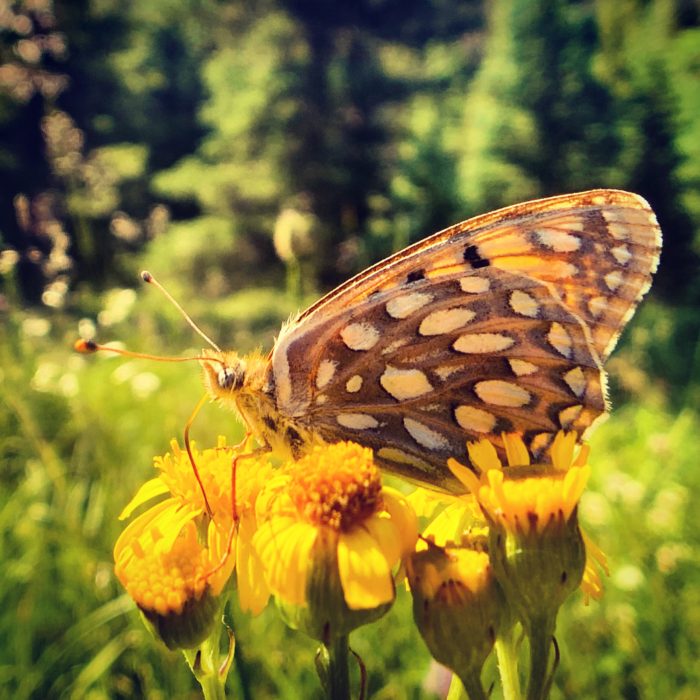 It’s not a tornado, it’s a butterfly. Rather than posting photos of all the destruction, I will post a symbol of beauty that accompanies the change. I am heartbroken by what happened and hope those affected can move forward successfully.

We left Alabama in a hurry and drove northeast through Tennessee and into Kentucky on this first day. Rain and wind was a problem with a 41ft platform, but we kept going, we finally stopped in Muhammad, IL. It was there that I learned what had happened to Ohatchee and several other nearby towns.

Being a natural disaster doesn’t lessen the shock or the heartache, and my heart pains for all the kind people we have befriended. Unlike most of them, our home was mobile.

Note for myself; count your blessings.

Back to the task at hand.

We had to go northwest, but there was a blizzard coming from that direction. To our south was the storm system spewing tornadoes throughout the southeast.

Muhammad isn’t exactly a hiker’s paradise, but since I was lame (for several months, it turns out) and our location basically got us stuck between weather systems, this is where we spent next week squatting. We had electricity, luckily, but not a layer of Wi-Fi.

In the end, Wyoming and Wonderland 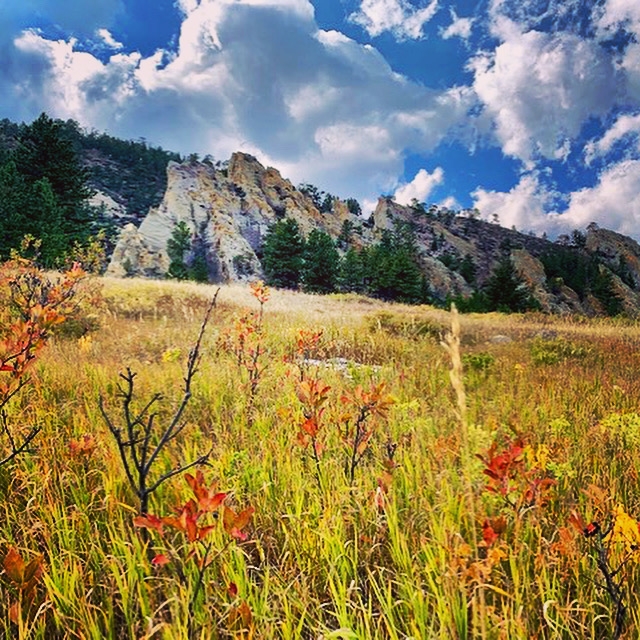 At this point, I was getting very sick, which sometimes happens when your kidneys start lifting; there is no reason, it just happens sometimes. And WOW did they do a number on me.

That’s why I was AWOL. Ok, that, the ankle, and then the smoke which caused some problems. It has been an adventure.

Right now, the only thing I have been able to accomplish over the following months is to become horribly out of shape and soaked in the “Unexpected Blues Off Track”.

Got a few hiking passes for The Wonderland Trail this fall. After smoking last year, I had little hope of getting licenses two years in a row, but here we are. This time, I hope we beat the snow, because even though it’s smoky .. we’re going! We have masks. We will live. 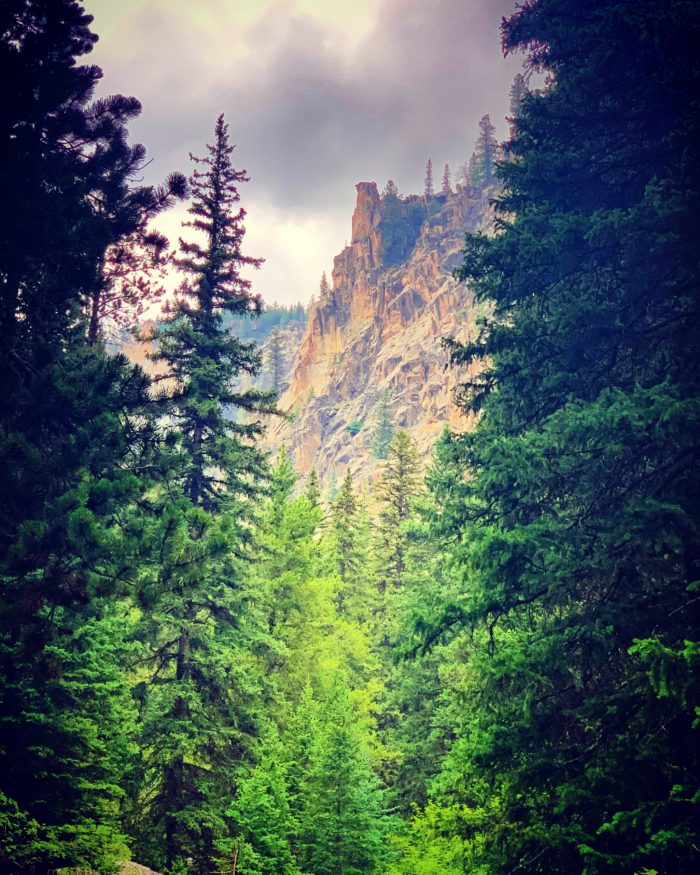 Crazy Woman Canyon in the Bighorn Mountains, Buffalo, Wyoming. The smoke this year has been horrible, but hiking with a Covid mask has made life bearable.

Let’s go to put the last year behind us and go hiking!

Have any of your plans derailed this year? How did you handle this? (Tell me, I’m not the only person who gets really depressed when my hike is messed up…) 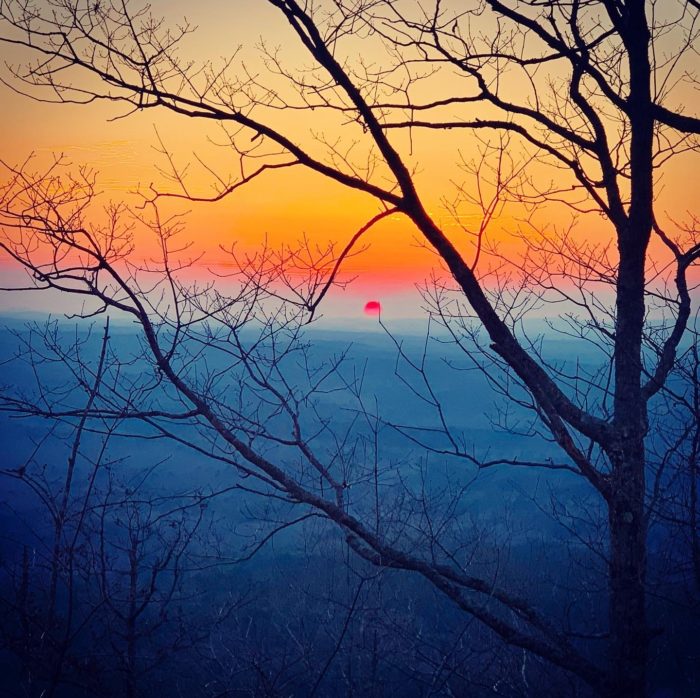 Beauty calm before storms in Alabama on the Pinhoti Trail. I might have missed TA this year, but life had other plans. So here is my hike on the Appalachian Trail in 22 ′!

A look back at the local legends of water skiing

Fall Adventures in Wisconsin from Zipline to ATV

Hike through the National Botanic Gardens of South Africa