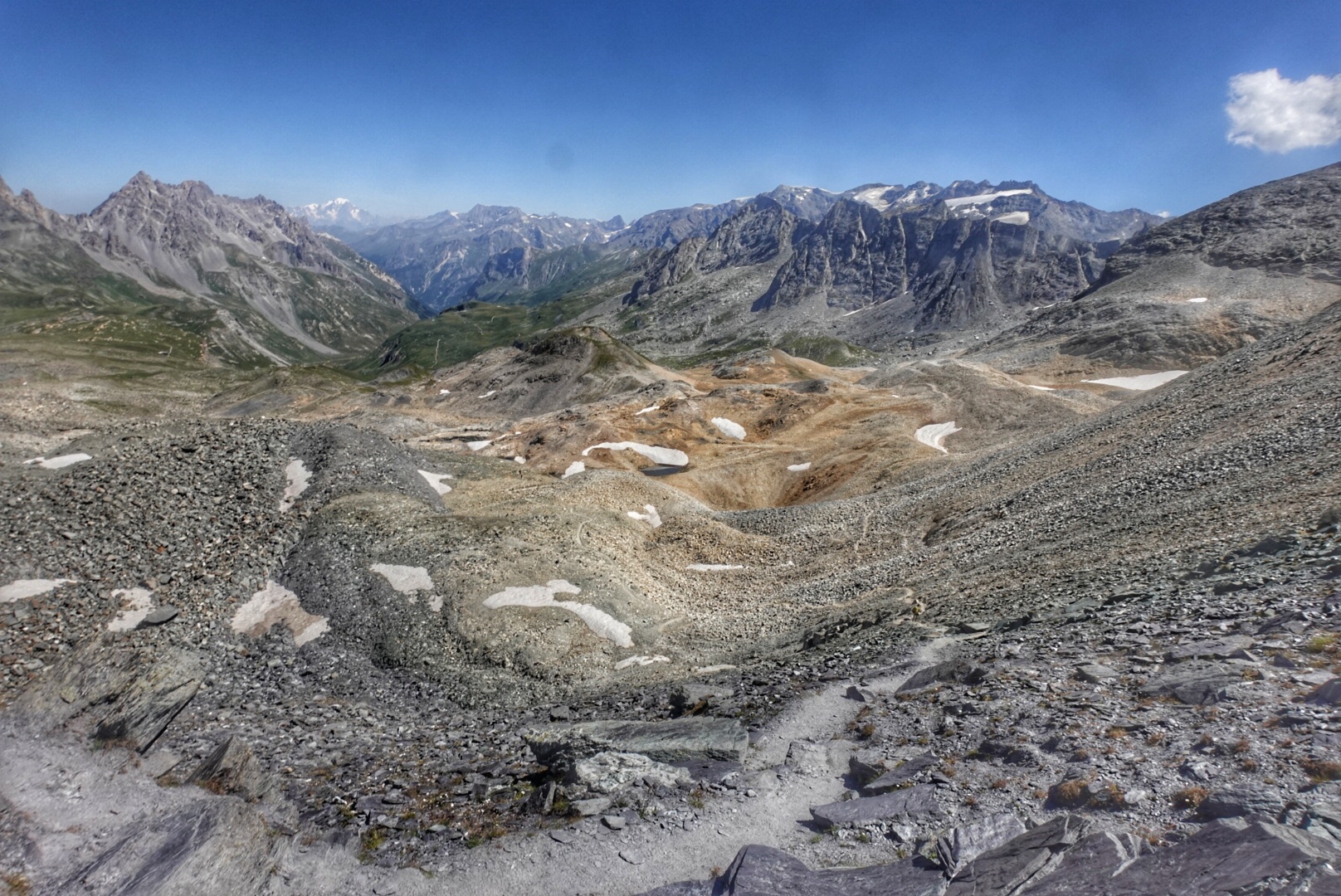 Hiking in the Vanoise National Park in the French Alps

After finishing the Tour de la Haute Tarentaise in the French Alps yesterday, I have a quick and easy hitch in Tignes, not far away, to start a traverse/loop of the Vanoise National Park.
My itinerary combines the Tour des glaciers de la Vanoise and the GR 55, which is an alternative to the famous GR 5, a path from the Netherlands to Nice and crossing a lot of mountains.

I had never been to Tignes before and it’s actually a really cool place for a ski resort.
It is surrounded by dramatic mountains and has an alpine lake in the middle.
The trailhead is truly beautiful and has a kind of otherworldly quality to it.
But it gets better throughout the day.
It’s absolutely beautiful, with tons of marmots and chamois.
Although most glaciers are sadly not what they used to be, it’s still amazing.
Wild camping is prohibited in the park, so I walk to a shelter, where you are allowed to pitch your tent.
I consider having a beer but feel too lazy to leave the tent.

It’s a bit strange to leave the campsite through the refuge.
There are quite a few hikers on the trail.
More hikers than I’ve seen in years actually.
Even more than what I saw last week on the Tour du Mont-Blanc.
I hadn’t realized how popular Vanoise was.
Well, actually, it makes sense because it’s amazing.

Today’s section was entirely on the GR 5 and I have to say this is by far the easiest mountain hike I have done in France.
Usually it’s a pretty steep climb, followed by a steep descent.
Repeated day after day.
But today the trail follows the side of the mountain on an easy trail for most of the day.
I could get used to it.
But all good things must end.
The descent to Modane is steep and slippery.
My knees don’t feel too good.

I manage to restock myself just before the supermarket closes, to take water and go back to where I come from.
I will continue my loop tomorrow by now joining the GR 55.
Although I still have no idea where I will end the trail on the loop.
There is no traffic where I am supposed to stop, but apparently there are shuttles that can be found.
Better than walking 6 hours I have already walked to return to Tignes.
I’ll play it by ear.

Well, it’s definitely not flat anymore…
The climb from Modane to the Col de Chavière is one of the biggest I’ve done in recent years, but at least it’s in the morning!
And it’s worth it.
The views from the pass are amazing and it’s gorgeous all the way to Pralognan.
There’s nowhere to camp for long so I have to stay in town.

I was considering cowboy camping, which is allowed, but I need to do some urgent internet stuff (my sim card isn’t working).
But it turns out there’s absolutely nowhere to get internet in town, so I’m just hoping for the best as far as shuttles and trains go for my trip home tomorrow.

I get up earlier than usual (early mornings aren’t really my thing, 7am being quite early for me) so I’m sure I’ll have time to get home today.
I have a big climb to the Col de la Vanoise but it’s not yet hot so it’s not too bad.
This last section might even be more spectacular than before.
It’s beautiful all around, the marmots are lounging at the edge of the trail and don’t even move when you pass by… It’s one of those days when it’s super good to be alive.
And it makes you love hiking even more (not that I needed to, but it’s still nice)

I take a snack break at the pass refuge and while talking with an employee, she tells me that the number of hikers has exploded in the last two years.
I know a lot of people might find that to be something to bitch about.
But it makes me happy to know that there are so many people to see the beauty of the world.
Although I guess a good thing would be to publicize other lesser known trails in France.
I’ve hiked so many amazing places here that I’ve never seen a hiker.
Distributing traffic on the trails would certainly be a better thing for the environment and the hikers.
But I would never tell anyone NOT to hike Vanoise, because it is truly amazing.
Although the location of the campsite requires a little more logistics, it is definitely worth it.

On the last stretch of the trail, I realize that if I rush a bit, I can catch an early shuttle.
As I’m only 100 yards from the bus stop, I see the shuttle coming and wave my walking poles in the air and start running uphill.
But the driver has seen me and is waiting for me.
It was closed.
The shuttle takes me to the first town from where I hitchhike to Modane, where I was yesterday morning and I manage to catch a train earlier than expected.
I will arrive at the house just in time for the aperitif with the family.

This website contains affiliate links, which means The Trek may receive a percentage of any product or service you purchase using the links in articles or advertisements. The buyer pays the same price as they otherwise would, and your purchase helps support The Trek’s ongoing goal of providing you with quality hiking advice and information. Thanks for your help!

To learn more, please visit the About This Site page.