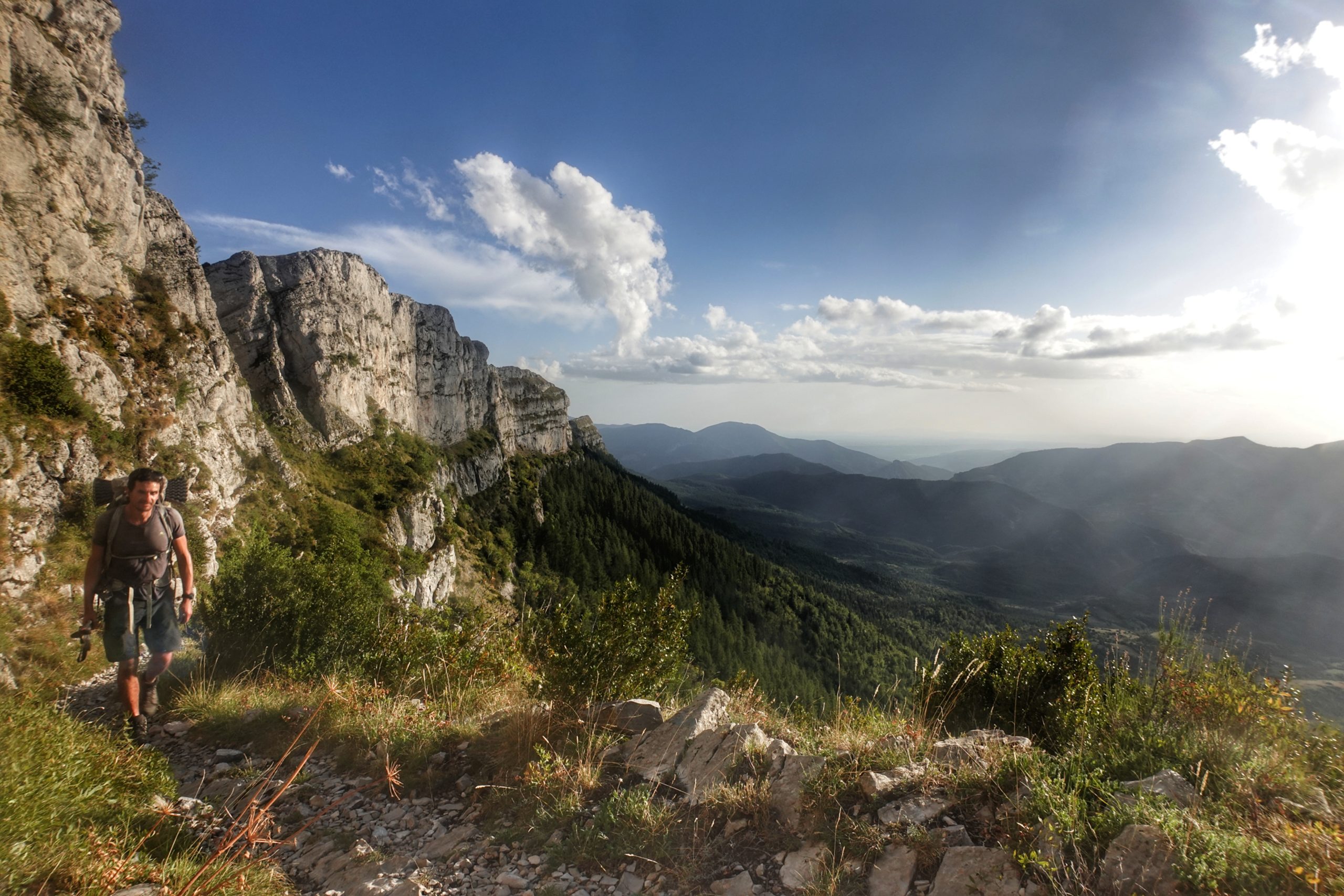 The Grande Traversée des Préalpes is a 161 km trail from Sisteron to Entrevaux in France.
As the name suggests, it’s not quite the Alps yet but it’s still quite hilly.
The area also has a pre-Provençal feel to it, which is really cool.
And there should be quite a few cool towns and villages on the way, including Sisteron, the northern terminus.
It is not a traditional GR, but a GRP (GR de Pays), which generally represents local, shorter paths, often making a loop. This one doesn’t.
Instead of the famous red and white lines for the markers, these are red and yellow.

After a pretty intense month of August hiking, I ended up taking a longer than planned break and staying home for a week.
I went to the cinema, I saw friends, I found new material, rest, and beer and cheese in me.
I’m definitely ready to get back on track.

Although it looks like the weather is going to be horrible all over the country for the next week.
After a week off trail, I decide to go anyway, but obviously avoiding the high mountain trails.

It’s quite a mission to arrive in Sisteron.
I feel too lazy to hitchhike and it might rain, so I decide to take buses and trains even though it takes much longer.
The thing is, I was kind of sold a ticket to a bus that doesn’t exist.
We were 8 people waiting for this bus when another bus driver told us that this line was not working and hadn’t been working for 7 months!
But it is always announced everywhere and on the monitors.
They even had an announcement for the bus in the station!
Anyway, after getting really mad at a hopeless lady from the train/bus company, I realized they didn’t care and I had to hitch a ride.
Fortunately for me, the first car stops and takes me to Sisteron.

The city has a spectacular location, with a strange giant rock on one side and the citadel on the other.

I visit the citadel before refueling and finally getting back on the track quite late.
But just in time for time to collapse!
After an hour thunderstorms are everywhere, the rain gets heavy and even though I’m not high on a ridge, it’s still quite intense.

But the rain subsides after a while and checking the forecast in my tent for tomorrow, surprise they say sunshine instead of the rain and thunderstorms I’m supposed to have for a week.
I’m crossing my fingers that doesn’t change.

It is indeed a sunny day.
But there is still a lot of mud, and it sticks to my shoes, which makes them really heavy.

Got some nice views hiking on a ridge for a bit, before descending to Thoard.
I have to say that I may not be doing big mountains like I have been doing for 2 months, but the ups and downs are still pretty brutal.
And the terrain is not the easiest.
It’s mostly rocks that roll underfoot, my ankles don’t like that.
But ascending for the last time of the day, I come to a ridge line that offers a fantastic view in the evening light.

I take a 30-minute detour to the top of La Bigue and pitch my tent shortly after.
I’m pretty tired but it was a nice day.
I was hoping to get to Digne tonight, but it’s still 6km away.

Finishing the walk on the ridges with the sunrise is a real treat.
After a few hours I arrive at Digne where I refuel.
This will be my last until the end and I get a little carried away with the food.
And of course there’s a climb right after, where I definitely regret buying any extra stuff.

But again, it’s a beautiful day and the scenery is fantastic.
There is definitely a different vibe on this trail, compared to others I’ve hiked in France.
I really like this mix of mountains and Provence.

Although there isn’t a ton of water and for a few hours, I’m not sure I’ll find a source in time for tonight.
Which means I would have to walk to the next village, which would be at least an hour of night hiking.
But luckily I find a river and a campsite nearby.

I enter the Verdon region, famous for its gorges.
This trail doesn’t go there, but I hiked it last year on my big hike through France and it ended up being one of my favorite sections.
The gorge is amazing and walking around Lac de Sainte-Croix was definitely a highlight.

I end the day in the village of Méailles, which benefits from an exceptional location.
As I check my GPS to see where I can find water, a local tells me that there is an area behind the town hall that is good for camping, with restrooms and picnic tables. fuck.
It’s just perfect because it’s getting dark and I don’t feel like looking for a campsite with my headlamp.

I don’t know if I will finish tomorrow, but it is possible and it would make my life easier for transportation the next day.

Well, I was pretty happy with my progress yesterday, but today is a different story.

As I followed the yellow and red beacons, I found myself in Fugeret, a village that I must not cross.
I was going to blame an insufficient amount of coffee this morning, but I spot a GTPA sign in the village.
I am but the beacons disappear quickly.
I look at my map to find the best way to get back on track and decide to follow a track that should do it.
It’s a very steep climb, only for the trail to disappear into the woods at the bottom of a cliff that seems impossible to climb.
I turn back to try a second track and have better luck this time, although I probably lost a few hours, which means I’m not sure I’ll finish today, which disrupts my transport plans for tomorrow .
But it’s still very beautiful and I cross a very beautiful forest typical of the south of France, with nice rocks on the way.

During a snack break, a shepherd starts chatting with me, which is always nice when you’re hiking solo, but it quickly turns into an inaudible monologue about his life, where he stares ahead of him as if I’m not not here.
Not to mention his two dogs that barked at me for ten minutes, probably some of the weirdest/scariest dogs I’ve seen.
Their eyes basically said, “Yeah, we’re gonna jump down your throat”
I’ve never been afraid of dogs, but this time I am.

After this strange encounter, I see a sign indicating that I am actually much closer to the terminus than I thought.
It’s good news.

I then finish my hike in Entrevaux, a very beautiful bastide overlooking a river.
I check the train schedule for tomorrow, visit the city and get myself a pizza and some wine before pitching my tent by the river.

I really enjoyed this trail and its different vibe to other trails I’ve hiked this summer.
This is definitely a hidden gem, I didn’t see any hikers there, including day hikers!

This website contains affiliate links, which means The Trek may receive a percentage of any product or service you purchase using the links in articles or advertisements. The buyer pays the same price as they would otherwise, and your purchase helps support The Trek’s ongoing goal of providing you with quality hiking advice and information. Thanks for your help!

To learn more, please visit the About This Site page.

Despite their close bond, Tiger Woods broke up with skiing legend Lindsey Vonn for one major reason