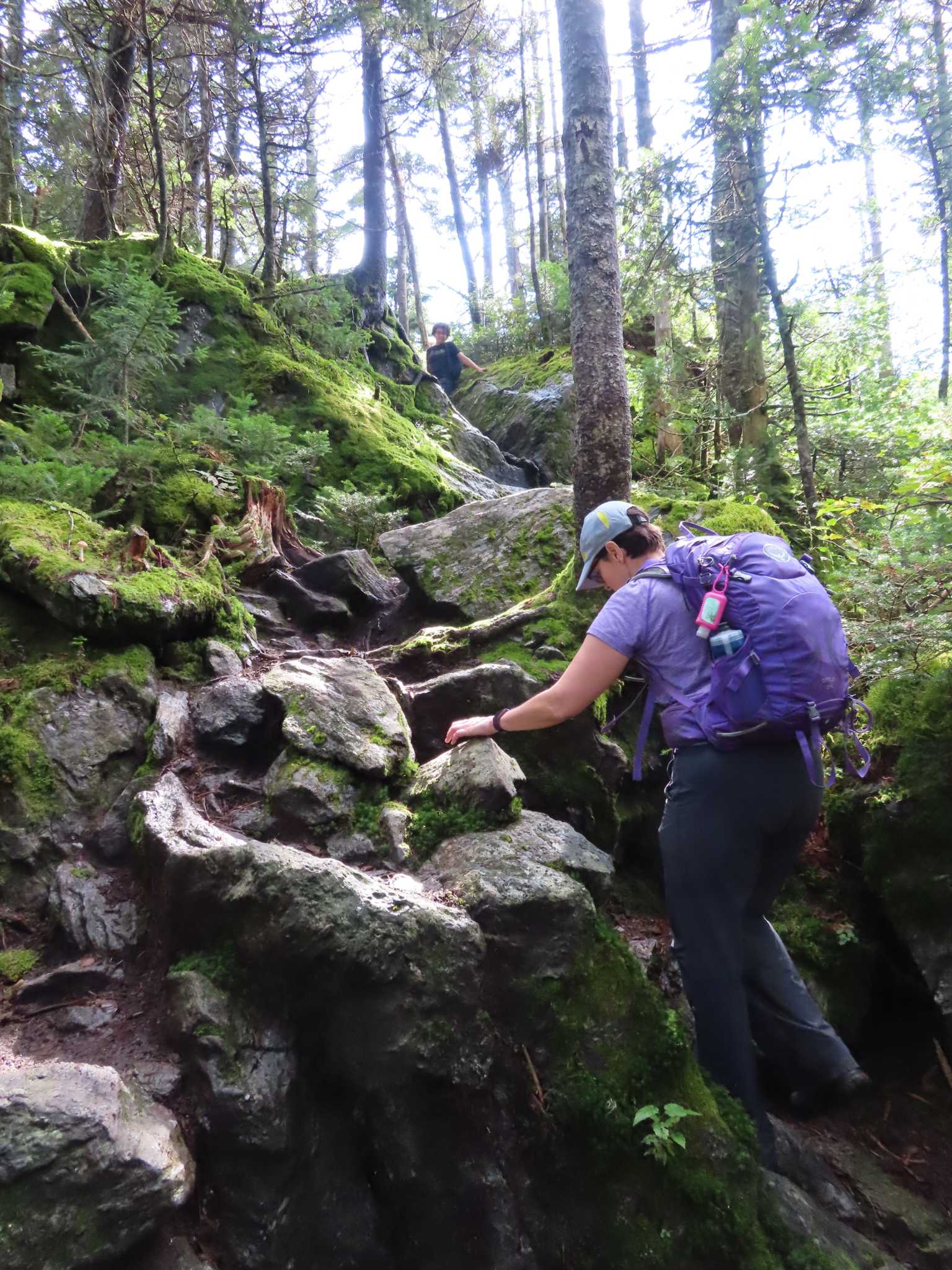 Hike for views in Vermont

When we climbed Mount Ellen, a high peak in Vermont, it was hard not to compare to hiking the highest peaks in the Adirondacks.

The Adirondack High Peaks, with 46 peaks traditionally considered to be over 4,000 feet, draw a lot of visitors, so much so that parking has become a major issue. If you do not arrive early enough at some trailheads, you may not be able to find a place to park.

The Vermont High Peaks, with just five peaks over 4,000 feet, have a much more relaxed vibe. We started our hike up Mount Ellen around lunchtime, for example, and parking – along the shoulder of a country road – was plentiful. On a sunny weekend!

In the Adirondack High Peaks, protected by New York State’s “forever wild” clause, it is rare to see man-made structures. Only one mountain – Whiteface – has a ski slope, as well as a road and buildings on its upper part.

In Vermont, several of the highest peaks are used by ski operations – Mount Ellen is home to the Sugarbush Resort ski lifts, Killington Mountain is home to Killington Resort, and Mount Mansfield is home to Stowe Mountain Resort – so hikers will find open glades. and ski lifts. and other structures that make a ski slope possible.

My husband, Herb, and I hiked the peaks of Vermont for several years as we made sporadic trips to Green Mountain State. We completed our ‘Vermont 5’ quest almost after the fact a few weeks ago, marking a few days in Montpellier on a vacation in the Adirondacks so we could hike Mt Ellen.

From the Jerusalem Trailhead near Starksboro, the hike is 8.5 miles round trip with over 2,500 feet of gain. The trail climbs steeply to join the Long Trail on the mountain ridge, then levels out until you get closer to the top.

Our 11 year old easily climbed the steeper sections of the trail, enjoying climbs over large boulders and jumping over mud puddles. I dragged in the back, certainly the weakest link, huffing and puffing and wishing we had lunch before we started. It was nearly 2 p.m. when we finally stopped to eat on the ridge, and the mid-morning breakfast sandwiches we’d picked up at a restaurant in Lake Placid had burned long before.

The trail offered few places for lunch – every boulder big enough to roost was wet and in the middle of the trail – so we took a low herd path to a little lookout which yielded some unexpected treasures: besides a view of Mount Ellen, and a comfortable log to sit on, there was a slightly torn snakeskin and a full cider can tucked away under brush. Was cider “trail magic,” a gift left to a tired Long Trail hiker? Or was it just garbage? We debated and decided that the advocates of Leave No Trace would like us to wrap it up. The snakeskin we left in the woods for other hikers to discover.

Reinvigorated by lunch, we stepped out shortly after to the open ski slope near the top of Mt Ellen. The ski lift equipment was an easy target, but was it the top? We spent some time wandering around the nearby woods looking for some sort of marker and then headed for the open slope to take a break and take in the amazing views.

The grassy slopes, dotted with wildflowers in late summer, reminded our team of “The Sound of Music” and two of us twirled appropriately Julie Andrews and sang our best (not very good) versions of “The Hills Are Alive… ..”

Our quest finished, we went back down to the car.

Another contrast must be made, however.

No such organization or effort exists for the summits of Vermont. The Green Mountain Club is nearby – it maintains and protects the Vermont Long Trail – but says it doesn’t recognize or keep a list of those who climb all of Vermont’s high peaks.

So if you plan to hike the 4,000 foot peaks of Vermont, do it for the view. Do it for days in the woods, fresh air and exercise, and maybe for company. Who needs another patch, anyway?

Two Colorado Hiking Trails Rank Among Best in Nation, According to Travel & Leisure

In the Scottish Highlands, a hiking dream come true

Man rescued after falling 300 feet while hiking the CO trail