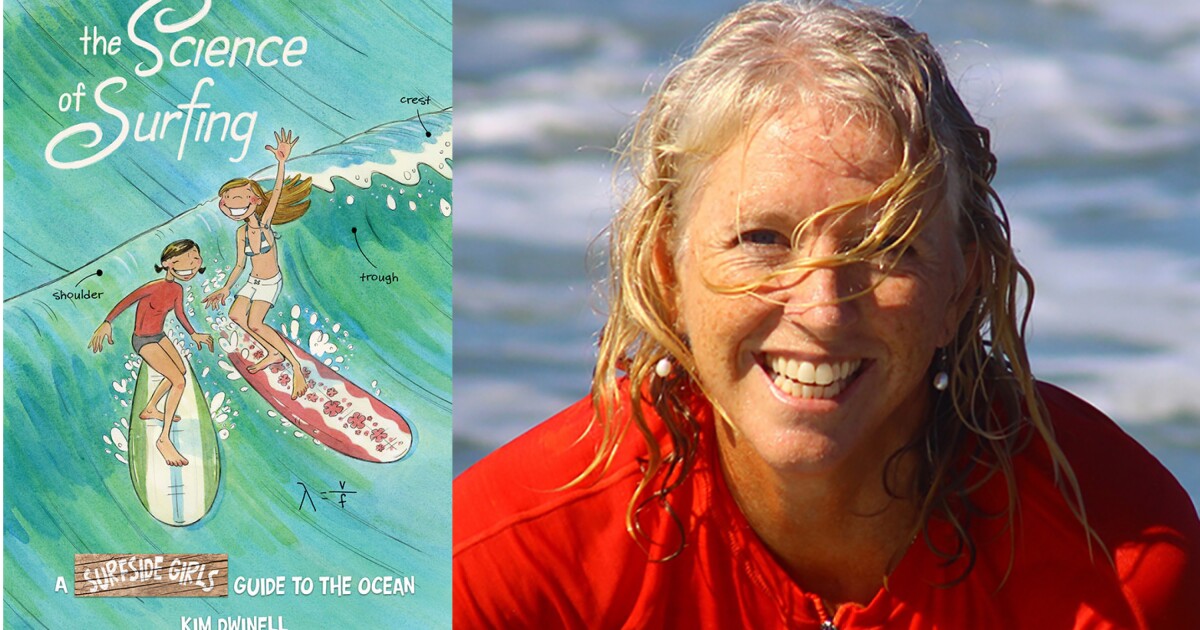 By the time she graduated from Laguna Hills High School in 1987, author-illustrator Kim dwinell had traveled a lifetime. But no matter where his father Marine took the family, Dwinell always had a home in the ocean.

“I’m a marine brat. Everywhere we went there was always an ocean. It was the only constant in my life, ”said Dwinell, who grew up in Pensacola, Florida, Okinawa and Southern California. “I always say that having a military childhood shaped who I was. It was hard, and my comfort was the ocean.

Dwinell now lives in Long Beach, where she teaches at California State University Long Beach and spends merry mornings on her stand-up paddle board in Alamitos Bay. With the help of San Diego IDW publication, she also devotes a large part of her professional life to celebrating the aquatic world that was her refuge, her playground and her bottomless well of inspiration.

In addition to teaching in the animation program at Cal State Long Beach, Dwinell is the author and illustrator of “Surf girls” a mid-level graphic novel series following two ocean-loving best friends as they surf and solve mysteries.

In the fun spirit of the “Scooby-Doo” cartoons and “Nancy Drew” books she devoured as a child, Dwinell wrote and illustrated “Surfside Girls: The Secret of Danger Point” from 2017 and ” Surfside Girls: The Mystery at “in 2019. Old Rancho. Graphic novels were published by High-end productions, a brand of IDW Publishing, which has its offices in Liberty Station.

The stories were inspired by the endless summer experiences of Dwinell and his best friend, Melissa, who were role models for Sam (short for “Samantha”) and Jade, the show’s sleuth heroines. And while it’s true that Kim and Melissa’s adventures didn’t involve ghosts, secret underwater caves, or mysterious mustached men, they were fueled by the same forces that make the mysterious “Surfside Girls” machine buzz. “.

At the end of a long day of phantom bickering and waves, Dwinell’s books are all about the power of friendship and independence.

“The summer before high school, my best friend, Melissa, and I learned to surf on our own. We took our surfboards to the Laguna Hills Mall, then took the bus to Doheny (State) Beach. We were both 14 years old and just under 5 feet tall, and we were going through these adventures on our own. There were no surf camps. You just took your board to the beach and did your best, ”said Dwinell.

“I took that fun that we had and moved it to college, where your relationships with girlfriends are so important. And since I love mysteries, I was like, ‘What if you had two daughters. who solved mysteries in the best beach town in the world? ”And that’s how I started.”

The third installment of the series takes Sam and Jade in a whole new direction. It also helped Dwinell find his way through a year that tested us all.

The third book in the “Surfside Girls” series finds fictional best friends exploring the real scientific wonders of the ocean. It is called “The Science of Surfing: A Guide for Surfside Girls on the Ocean”, and like the series itself, the book comes from a personal place in the author’s life.

The book was released on August 24, but its roots can be traced back to a project Dwinell completed during her graduate studies at California State University Fullerton, where she received her MFA in 2011.

The project was a “How to Surf” tutorial in comic book form. He drew on the knowledge Dwinell gained during her years as a lifeguard at Laguna Beach and Lake Mission Viejo, the illustration skills she honed during her mid-90s stint at Disney, and the love of storytelling that sustained her during her marine godmother. years.

When the COVID lockdown kept Dwinell inside, she still found a way to escape into the wild. She also found the idea for her next book.

“When COVID hit, things were weird. I watched live streams from the Monterey Bay Aquarium and saw what NASA was saying about the tides. As a surfer I always had a tide chart and a tide clock, but I was like, “But how does the moon cause tides? “And I did a lot of research so that I could understand it enough to explain it,” said Dwinell, 52.

“I thought I would do a third mystery, but I really liked the research, so I asked my editor if I could do it first. And that was my COVID experience, just sponging it all off. “

In “The Science of Surfing“, Dwinell sends Sam and Jade on a brilliantly illustrated journey through chapters on biology, physics, the strange ocean phenomenon, how to surf and how to be a good steward of the ocean. And whether they’re learning pelican’s feet, bioluminescence, wave physics, or the importance of recycling, Dwinell hopes audiences will remember finding joy in their friends, comfort in the ocean, and good karma. taking care of the people and the planet they love.

“I really wanted to promote this image of smart, courageous, healthy and intuitive girls running around the ocean, taking notes and caring,” said Dwinell. “I think California is really amazing because we have decided that the beach belongs to everyone. There is something really special about it.