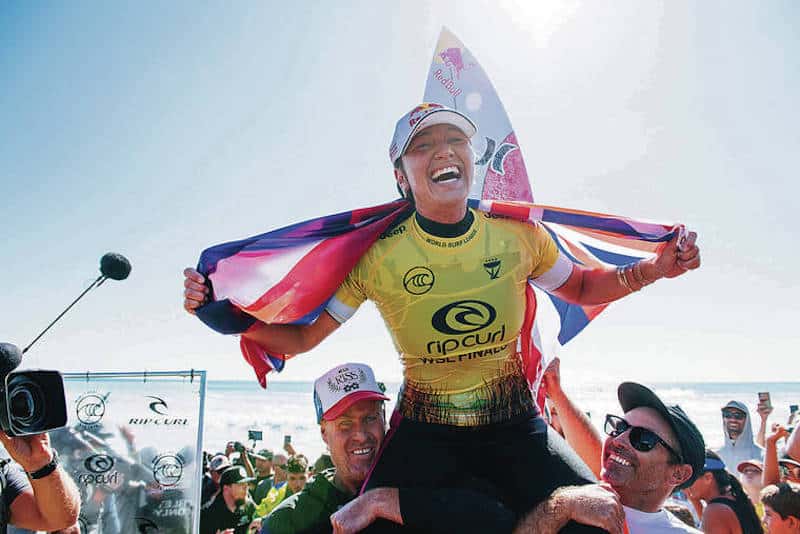 Carissa Moore of Hawaii closes the most successful season in surfing’s long history with an induction into the Huntington Beach Walk of Fame!

The ultimate surfer will be airing her last episode tonight on ABC television and Zeke Lau will win and one of the remaining entrants will win too, but we all know, and they all know too, that “Ultimate” means “Slightly above average” in their case.

No, the Ultimate Surfer is Carissa Moore and not even eleventh world champion Kelly Slater has had a more successful season than she.

Then, she won the very first day of the World Surfing League Finals, winning her fifth world title along the way.

Now, it becomes registered on the very august “Walk of Fame” of surfing of Huntington Beach.

John Etheridge, Chairman of the Surfing Walk of Fame Board of Directors, said: “After 18 months of global shutdowns and uncertainties, this year’s class of Surfing Walk of Fame inductees is incredible. Our goal of celebrating surf, surfers, surf culture and its history has never been more fully represented than in this class. In a year where we have lost so many inductees like Greg Noll, Ben Aipa and Rick ‘Rockin Fig’ Fignetti, we are very proud to honor this year’s group of recipients.

Moore enters the March as “Woman of the Year” alongside Damien Hardman, consecrated as “champion of surf”, Mike Tabeling, “pioneer of surfing” Cecil Lear and Hoppy Starts, “Surf Culture” and others.

A great honor, anyway, and there is hardly anything that great shadow painter Kelly Slater could say or write to decrease at all.

No way he could pour her half-empty glass.

Moore as the story unfolds.

Munster Vales has a lot to offer for hiking enthusiasts