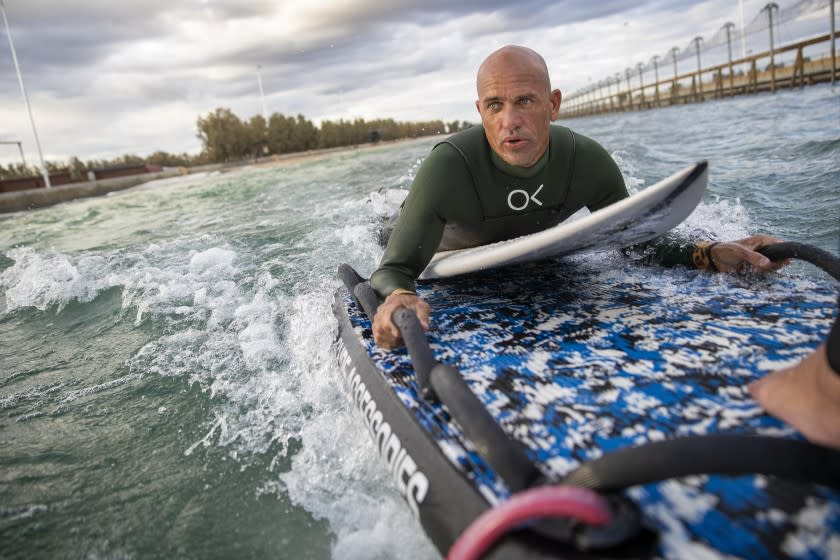 Normally Lemoore, California might seem like a strange place to host a surf competition. After all, the borough of Kings County is 100 miles from the Pacific Ocean.

But it turns out that “normal” is not the style of “The Ultimate Surfer”.

ABC’s new reality competition was born from a meeting of minds in early 2019 between world-renowned professional surfer Kelly Slater, CEO of the World Surfing League Erik Logan, CEO and Chairman of Pilgrim Media Group Craig Piligian and UFC President Dana White at the Surf Ranch, Slater’s man-made waves oasis in the Central Valley. Production began in early 2020, to be halted by the coronavirus pandemic. When filming resumed last summer, it was in a COVID-19 “bubble” at the ranch. Now the long-awaited debut of the series has arrived, with a two-night premiere starting on Monday.

And despite the long road, the timing is right. Surfing just made its buzzing Olympic debut at the Tokyo Games, and Slater recently told the Times that the event could one day turn into wave pools – including, perhaps, his own, when the Olympics are held in LA in 2028.

“The Ultimate Surfer,” hosted by former NFL player and “Bachelor” Jesse Palmer, features 14 men and women – including six Californians – vying for the title while living and training together at the ranch . Sports presenter Erin Coscarelli and “The Voice of Professional Surfing” Joe Turpel will provide the full color commentary, and Slater is on hand as a senior consultant and special envoy.

Surfer and Times photographer Allen J. Schaben captured exclusive footage of the making of “The Ultimate Surfer” last March, before it closed, and returned to the ranch earlier this summer to photograph the action at the WSL. Jeep Surf Ranch Pro, where athletes from around the world demonstrated what the ranch can do.

Skiing in Africa? Tourists hit the slopes of Lesotho despite COVID-19 woes