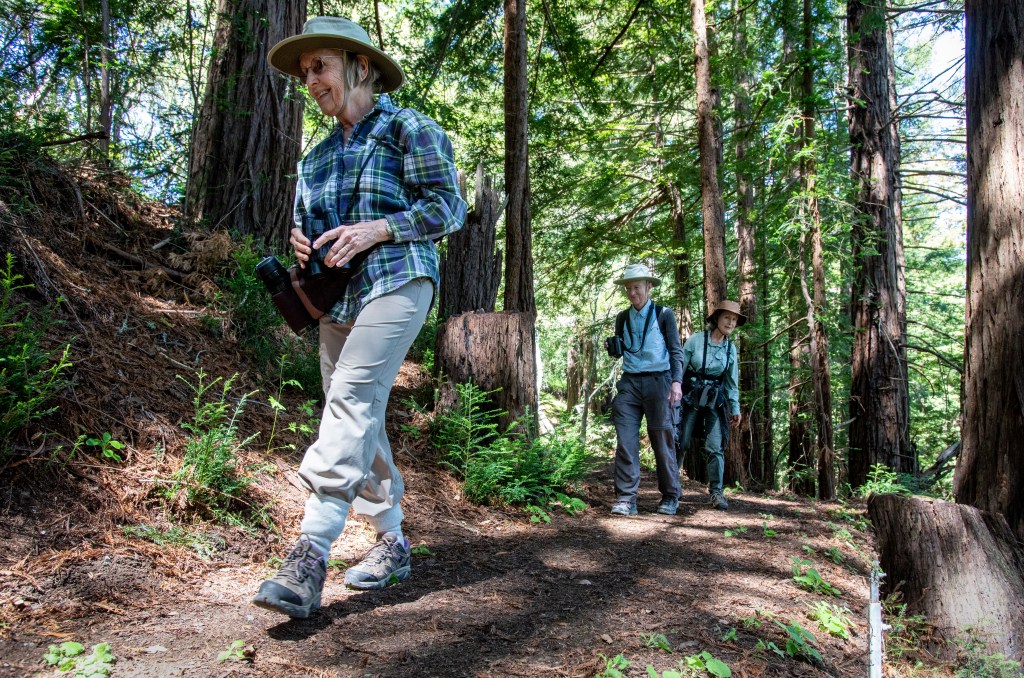 A new trail opening this afternoon in the hills above the San Mateo County coast is a classic walk through a Bay Area nature preserve: 1.3 miles of windswept meadows, hardy oak forests and shady redwood groves with sweeping views in the distance.

But the Grasshopper Loop Trail, nestled between La Honda and San Gregorio in the La Honda Creek Open Space Preserve, has a unique distinction: Its completion marks the 250th mile of trails built by the Midpeninsula Regional Open Space District since voters created the government agency. 50 years ago.

Walking every 250 miles would be like walking from San Jose to Lake Tahoe or walking from the Golden Gate Bridge to Eureka.

The district commonly known as ‘Midpen’ was originally created in 1972 to protect wildlife and open space by preventing urban sprawl from spreading into the hills of the peninsula. Since then, he has preserved 65,000 acres – an area twice the size of San Francisco – from Half Moon Bay, along the Santa Cruz Mountains and to the summit of Mount Umunhum south of San Jose.

All of its 26 reserves are free, and the 250 miles of trails that cross them are open to hikers. Horseback riding is permitted for 216 miles. Cycling is allowed for 160 miles. Leashed dogs are allowed for 63 miles. When people traveling along the Interstate 280 stretch of the peninsula look west, many of the forests, meadows, and ridges they see in the distance are the protected lands of the district.

“I’m grateful that the local citizens had the foresight,” said James Eggers, director of the Sierra Club’s Loma Prieta chapter in Palo Alto. “The Bay Area and the Peninsula would be a very different place without Midpen. This is one of the reasons so many people want to live here.

“Without those reservations, it would be more like LA and some of the places I used to live in Texas,” added Eggers, who said he walked about 100 miles of Midpen trails. “There would be a lot more pavement. We would have fewer wild animals. And we wouldn’t be as physically, mentally, and emotionally healthy because we wouldn’t have as many natural spaces.

The district, funded largely by property taxes in San Mateo and Santa Clara counties, will hold a small ceremony this morning to open the new trail at La Honda Creek Open Space Preserve. The trail officially opens to the public at 3:30 p.m., although with only 22 vehicle spots, parking should be tight the first weekend.

During a recent hike on the trail, Lewis Reed, district botanist and range ecologist, reported dozens of plant and bird species. He noted that the new Grasshopper Loop Trail takes its name in part from the grasshopper sparrow, a small brown and white bird whose song sounds a lot like the buzzing of insects. But there is another meaning.

“One of the virtues of this trail is that when you hike it, you go in and out of different habitats – from prairies to redwoods,” he said with a smile.

La Honda Creek Open Space Preserve is not as famous as many other Bay Area parks. But it has a colorful history.

Nestled along the western edges of Highway 84 off Sears Ranch Road on the road from Los Altos to San Gregorio, the 6,334-acre preserve is six times larger than Golden Gate Park. It ranks as the second largest in Midpen, after Sierra Azul, a 20,000-acre wilderness area south of Los Gatos.

For the past 175 years, the property has been a Mexican land grant, dairy farm, hideout for members of Jesse James’ outlaw gang, oil field, redwood sawmill, ranch cattle and a retreat for the heirs of the Weyerhaeuser. the fortunes of wood and Folgers coffee.

The reserve was created in 1984 with the purchase of a 255-acre property.

It increased significantly after 2006 when the agency purchased the 3,681 acre Driscoll Ranch. This property, a working cattle ranch that belonged to Rudy Driscoll Jr. and other heirs to the Weyerhaeuser lumber fortune, had been zoned for up to 100 luxury homes.

For decades, the larger landscape of the area was divided into four different ranches and used for dairy farms, beef cattle, and logging for roof shingles. In the late 1860s it was used as a hideout by notorious outlaws Cole Younger and John Jarret, who were part of Jesse James’ gang.

Later, one of the ranches was owned by Peter Folger, grandson of James Folger, who came to San Francisco during the Gold Rush in 1850 and founded the coffee company that bears his name. The Driscoll family purchased the land in 1968 and sold it in 2002 for $21 million to the Peninsula Open Space Trust, a Palo Alto environmental group which then sold it to the Open Space District four years later for a reduced price of $9 million.

As a condition of the 2002 sale, Driscoll negotiated a 50-year grazing lease on the property for its Black Angus beef cattle. But Driscoll gradually left the cattle business and gave up the lease. He died in 2015 at his home in Woodside.

Half of the La Honda Creek Preserve, which opened in 2017, still remains closed to the public, following pushback from local La Honda residents who did not want parking and a visitor center near from the ‘red barn’, a beloved old landmark on the property.

With the addition of the Grasshopper Loop Trail, 11 miles in the preserve are now open for hiking and horseback riding. This week, a trio of women who watch birds in the area got a taste.

Skiing in France – The Dubrovnik Times