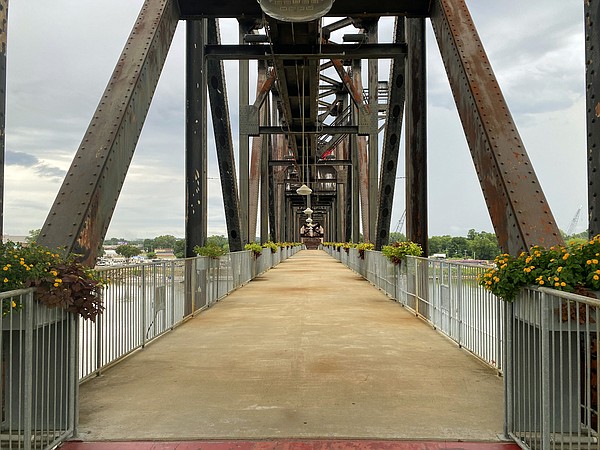 Outdoor writer and photographer Corbet Deary is a regular feature on The Sentinel-Record. Today Deary takes readers on a journey to the Arkansas River Trail.

After a two-year sabbatical from cycling, I recently decided it was time to get off my keister and get my bike back in roadworthy condition. Of course, my conditioning also had to be taken into account. In fact, it would take me many hours of riding before I could remotely consider trying the distances I had grown accustomed to just a few years ago.

I started with short hikes on fairly flat terrain. And although I was still reluctant to attempt the ascent to the top of the tower mountain, I started to hike routes that were a little hillier and noticeably longer.

I recently crawled out of the bag early and embarked on a road trip to the Arkansas River Trail. I had taken this particular route many times before. And even though the course was pretty flat, it would definitely give me some well-deserved time in the saddle. In fact, I was preparing for a ride of around 15 miles.

The trail begins at the William J. Clinton Library and Museum in Little Rock, crosses a steel bridge over the river, and follows the waterway for approximately 7.5 miles, to where it crosses the river via the Big Dam Bridge.

The trail then heads back down the river, towards the city center, taking several roads along the way. I’ve only done this entire route once, and for good reason. I’m not a big fan of sharing busy roads with vehicles. And the aforementioned route to the library happens to use a few stretches of road that are way too busy for me to consider myself safe from a distance.

That being said, I’ve always found it much more enjoyable to simply climb to the top of the Big Dam Bridge, turn around, and then return to the point where the ride began. This section of the route rarely shares the road with vehicles. And the few times it does, the traffic is virtually non-existent.

Although I always started at the Clinton Presidential Library, on previous rides I was aware that the journey to the starting point via Interstate 30 would prove to be dreadful. Something as simple as finding my way out could be a hassle, since the state is in the middle of a pretty major road project in the area.

With that in mind, I chose to park at Cook’s Landing, just below the Big Dam Bridge. I had never traveled to this particular hotspot. However, it was extremely easy to find.

The parking area is located within sight of where the Arkansas River Trail begins its ascent to the top of the Big Dam Bridge. Although we were traveling in the opposite direction, one might consider taking a small detour up the structure, as the views both up and down the river are impressive.

OK, after catching our breath and taking in the scenery, let’s head back down to the parking lot and follow the road towards the Clinton Presidential Library.

Although the drive to the top of the Big Dam Bridge was quite a long climb, don’t worry. In fact, pretty much the rest of the ride is flat except for when we cross the river just before turning around and returning to the starting point.

From the parking lot, the route begins to follow the large stream, as it will do most of the way. The trail crosses the edge of Burns Park shortly after. Although we probably won’t need a rest stop yet, we took refuge from the rain at the lodge next to the trail on our last hike.

The path then veers away from the river for a short distance, crosses a bridge and begins to descend back towards the waterway. It meanders through peaceful surroundings for a while, before climbing any hills and skirting what appears to be the remains of some sort of quarry.

Although the quarry is no longer in operation, one can clearly see where material was previously mined from the nearby mountainside. And the foundation of what I suspect was once a conveyor belt leading to the water’s edge is located a few feet from the trail.

At one point the trail crosses a bridge, skirts the road and turns sharply right into a wooded area. There is yet another slight ascent at this point. But again, it’s nothing that one will find difficult.

The route eventually returns to the road which it will share for a very short distance before rejoining a designated path alongside a golf course.

The route will enter Emerald Park shortly after; lending to an opportunity for one to use the restroom or take a break, if needed. The trail will meander through a wooded setting for a short distance en route to Riverview Park.

Starting at Riverview Park, the course will again share the road for a short distance. But as suggested earlier, one will probably not notice any traffic. In fact, it’s not uncommon to drive along this short stretch and not see a vehicle.

The trail leaves the road veering right and towards the river. It then passes between several houses and the waterway for a short distance, before winding its way under a railroad trestle and between the shore and Dickey-Stephens Park.

The path then passes through a few parking areas before sharing the road for a short distance once more. But again, the traffic will probably be light and the run is short.

The trail then turns sharply to the right and begins an ascent to the top of the bridge that leads to the Presidential Library. Although the climb is a bit long, it is not too steep. And the view from the top of the bridge is certainly worth the effort. The view, up the river, consists of several bridges and the downtown skyline.

Looking the other way, the scene is totally different. In fact, it is a stark contrast to the urban environment which is in the opposite direction.

Yes, the Arkansas River Trail lends itself to a peaceful and easy excursion along Arkansas’ largest waterway for both cyclist and hiker. And it’s a destination I plan to revisit time and time again in the near future.

The Arkansas River Trail can be accessed via Cooks Landing, located just downstream from the Big Dam Bridge. – Photo by Corbet Deary from The Sentinel-Record