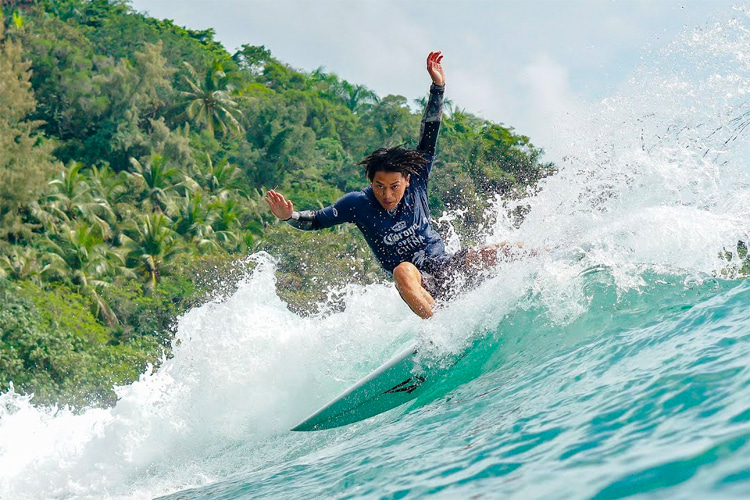 a rising star in Japanese surfing

“Shun Murakami: The Documentary” is an eponymous documentary featuring the Japanese surfing star.

The film captures the life and rising career of the 24-year-old goofy-footer from Yugarawa.

The 17-minute documentary directed by Tobias Memmott made its world premiere on YouTube.

It features guest appearances from Murakami’s mentor, Yamamoto Yoshihide, and a next generation surfer and follows Murakami, one of Japan’s leading professional surfers, on his lifelong quest to find the perfect wave.

Surfing helps him maintain his powerful connection with the ocean, which in its fascinating unpredictability leads him to explore its myriad waves.

The harder the wave, the greater his motivation to ride it.

Murakami is aware of the support he has received from his father and mentor throughout his journey that has brought him this far and believes it is important to pass this on to the next generation of surfers.

He looks forward to a future where more people watch and fall in love with his favorite sport that celebrates oneness with nature.

A rising star in Japanese surfing

Shun Murakami was born and raised on March 3, 1997 in Yugawara, Kanagawa Prefecture, Japan.

Ge started surfing when he was in the second grade of elementary school due to the influence of his father.

His home break is Yoshihama.

From the age of ten, he took part in the first competitions and quickly developed his talent by rapidly climbing the Nippon Surfing Association (NSA) rankings.

Murakami won the Japan Pro Surfing Association (JPSA) Tour from 2015 to 2017 at the the best surf spots in the country.

The young gun from the Land of the Rising Sun represented his country at the 2018 and 2019 ISA World Surfing Games and won copper medals for Japan.