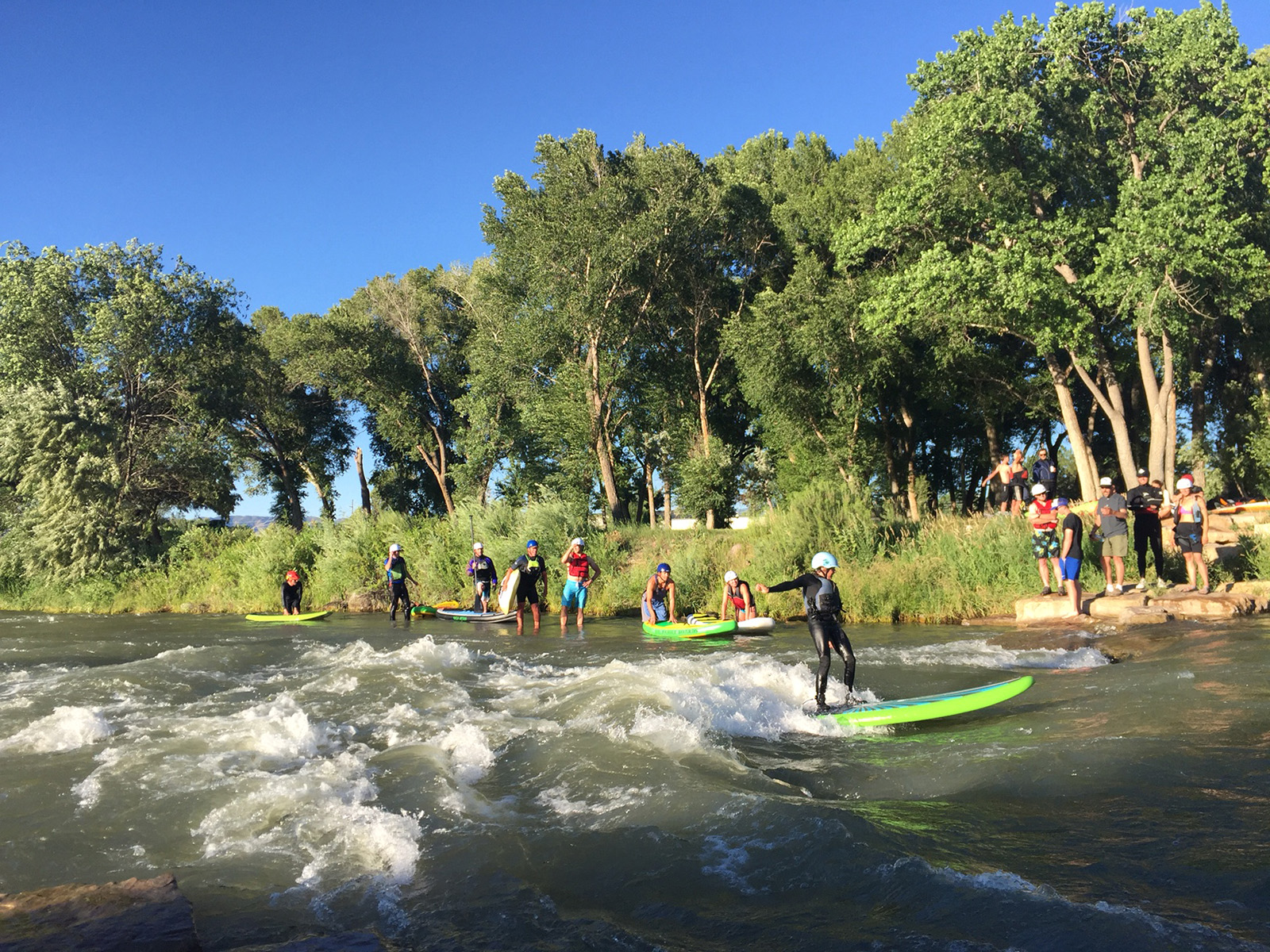 A beginner’s guide to river surfing in Colorado

Come summer to the Centennial State, there’s no shortage of creative ways to get in the water. Tubing, SUPing, rafting, kayaking, boating – they all provide that refreshing ahhhhh you want when temperatures soar into the 90s. But there’s a lesser-known way to get wet that’s well worth discovering this season: river surfing. Never heard of it? You are not alone, which is why we prepared this quick introduction to the FAQ.

What is river surfing and how did it come about?

While river surfing has only grown in popularity in Colorado over the past decade, the sport first came into its own in the 1950s in Europe. Germany was one of the first places where river surfing on standing waves – essentially standing waves that persist until water flows become too low – was documented, and it is now considered as one of the greatest urban surf spots in the world. River surfers rely on waves created either by a natural obstacle in a river or by man-made technology installed in a whitewater park. So for a river surfer, the surf is almost always up, and “catching” a ride is the easy part.

“The biggest transfer from ocean surfing to river surfing is that you’re making turns on a wave and loving it,” says Brandon Slate, co-owner and instructor at Rocky Mountain Outdoor Center in Buena Vista, which offers shore excursions. guided recreation as well as lessons for just about any outdoor activity. “The biggest difference is that waves on a river are seasonal, but once the wave is there for the season, it’s always there. You don’t have to compete for the resource.

There’s also no swell timing or paddling like hell to get on a wave. Instead, there’s just intense whitewater rushing all around you as you swim into the wave with your board, get just right, and then (hopefully) get into position upright. But once you’re there, there you are – carving and playing the wave until your muscles give out.

What equipment do I need?

Rivers are not oceans, so the equipment is entirely different. Slate stresses the importance of wearing all safety equipment, without exception. Here is what you will need:

Although people have been known to try almost any watercraft on Colorado’s rivers, including ocean surfboards and stand-up paddleboards, Slate says it’s important to have the right tool for the job. Compared to ocean boards, river surfboards are generally shorter, slightly less buoyant, and more durable, allowing them to withstand rocks and fast rapids. Chase Jones, retail sales associate at Montrose-based Surf & Cycle, recommends bigger, thicker boards for beginners because they’re more stable and easier to stand on.

Ocean surfers may be most familiar with a leash that attaches the board to a rider’s ankle with a Velcro strap, but in the river you need to be able to quickly break free from your surfboard when swimming. out of a wave. Equipped with a three-inch carabiner and carabiner (like a clip you’d see on a dog leash), an active-release leash releases when you pull a small ball attached to the carabiner. It is often attached directly to one of the straps of the PFD – essentially a life jacket – in the most comfortable place for the rider, allowing easy access when it comes time to ditch the board.

We know it: nobody likes the noggin protector, but helmets are always in style on a river. With ever-changing flow patterns, visible and invisible obstacles like rocks and submerged logs, and other paddle-wielding recreational enthusiasts, a helmet is a must.

Depending on the water temperature, riders can opt for neoprene wetsuits, booties and gloves. Although not mandatory, a wetsuit will keep you warm and add a bit more buoyancy to your body when swimming. The slippers provide an extra layer of grip as well as protection from rocks and other debris in the river. All of these items are available in different neoprene thicknesses, so you can adapt them to the river and ambient temperatures where you will be surfing.

Where can I buy gear in Colorado?

Yes, you can definitely buy all the gear you need online, but you can’t get expert advice or help with fitting on Amazon. Check out one of these local retailers instead.

Where can I learn to surf the river?

“If you don’t have surfing or wakeboarding experience, instruction is always helpful,” Jones says. “Plus, there are a few tricks in the trade when you’re in a river.” Montrose Surf & Cycle and Rocky Mountain Outdoor Center offer private river surfing lessons. In a typical beginner’s lesson, recruits should not expect to get up on the first try. In fact, Slate says his lessons for beginners mostly focus on river-specific safety, along with drills on how to release your leash and swim in and out of rapids, both on and off the board. . After you’ve mastered those skills, Slate says, it’s time to experience the wave. You will enter the water upstream of the wave and, lying on your board, start paddling downstream to position yourself in the pocket of the wave. Once there, timing isn’t a factor like in the ocean, but balance is; you will need to get up on your feet and keep your knees slightly bent. Once up, you surf! It’s easier said than done, but learning from an instructor will almost certainly speed up the process.

When is the best time to catch a standing wave?

As with all river sports, your load level will be dictated by the flow of the water. In Colorado, the river surf season typically runs from May through September, with peak flows often reaching the second week of June. This of course depends on several factors, including snowmelt, drought conditions and the river you are on. Online resources like SnoFlo and Endless Waves offer real-time updates on wave surfability across the state.

Where are the best waves in Colorado?

River surfers have their favorite spots just like ocean surfers dig certain breaks. Half the fun of the sport is discovering different places to play in the waves. Both Slate and Jones recommend a whitewater park for beginners due to the more controlled environment. These five parks, scattered across the state on multiple rivers, are designed with rocks and concrete structures strategically placed to simulate real whitewater conditions, including standing waves.