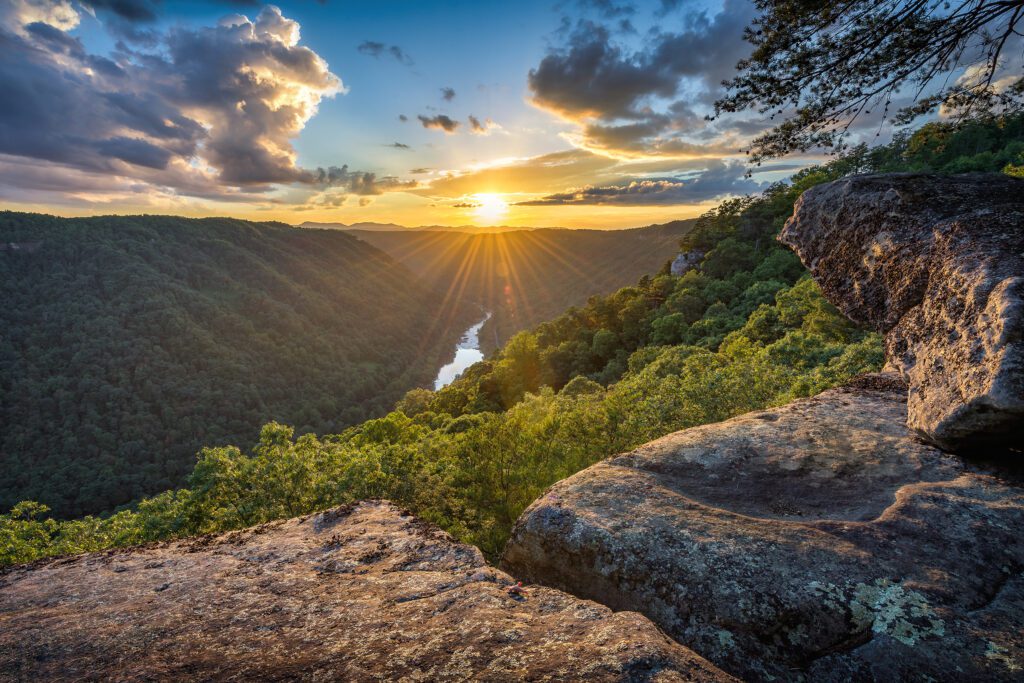 Is it time for a trip down those country roads you’ve been singing about? West Virginia is the perfect place to travel if you enjoy hiking through beautiful mountain scenery, listening to Appalachian folk music, and playing slot machines.

West Virginia is a state located in the Appalachian region. It is bordered by Virginia to the southeast, Kentucky to the northwest, and Pennsylvania and Maryland to the northeast. It became a state following the Wheeling Conventions of 1861, after the start of the American Civil War.

West Virginia was the only state to form by seceding from a Confederate state, and the first to officially outlaw slavery, and one of 11 to elect a black governor. Today, the state is known for its mountains and hills, historically significant logging and mining industries, and political and labor history.

For friends seeking adrenaline, River Day at the New River Gorge Bridge in Fayetteville is a must. Each fall, the bridge hosts the state’s largest one-day festival, where participants can join the 5k race or watch people jump off the bridge. The iconic landmark can also be seen in the global video game franchise Fallout 76.

West Virginia is one of the states in which physical and online gambling is legal. So you can play casino games or engage in betting on sites found on Cherryredcasino.com. Also, West Virginia University offers several good college sports opportunities that you can bet on. It will also give you a good chance to see WVU’s beloved mascot, the Mountaineer, dressed in buckskins and deer skins displaying a gun. You can bet on the arena lovingly singing “Country Roads” at the top of your lungs after the match.

Hike in the hills

The Appalachian landscape makes even the least active people want to do at least one hike. The beautiful sights available from vantage points such as Lindy Point or Seneca Rocks are hard to beat, and there are plenty of difficulty levels to choose from. West Virginia is home to several beautiful state parks, among which Blackwater Falls State Park stands out for its surreal waterfall that is equally awe-inspiring in all seasons. Dolly Sods Wilderness is also highly recommended.

For those interested in folklore, the mountain condition can offer some perfectly spooky and mysterious stories. One of these stories belongs to the mystical creation of the Mothman. Apparently first sighted in the Point Pleasant area in 1966, Mothman is said to resemble a tall man with 10ft wings and glowing red eyes. He is believed to have played a role in the 1967 Silver Bridge disaster which killed 47 people. There is both a Mother Man Museum and an annual festival held in Point Pleasant.

Shop till you drop

As a mountainous state, West Virginia is rich with intimate craft stores. For example, the small mountain town of Davis has become an artisan hub with several art shops and studios despite being home to only 660 residents. There are also a number of options for those looking for larger malls. Among others, Downtown Charleston, Meadowbrook Mall, and Morgantown Mall offer great shopping experiences.

Not only is Harper’s Ferry at the intersection of three states (WV, VA, PA), but it’s also an important historical site. See where the Civil War began following John Brown’s raid and hear the different voices that fought for freedom and equality in the Civil War Museum. There are also a few hiking trails that will lead to nice glimpses of the city which also served as the second US Armory.

The mountains of West Virginia have a lot to offer adventurous skiers and bikers. There are several stations to choose from, but Snowshoe Mountain Ski Resort stands out as the largest and most unique. It offers more than 60 trails and guaranteed snow cover. Additionally, the snow village is perched at the very top rather than separated or below, and is aptly named “Top of the World” to encompass the impression of its patrons.

Ride along the steam trains

The last item on our list is fun for young and old, especially for those who are tired of walking. The reason is that the beautiful scenery can be seen from the comfortable seats of a steam train. There are several different routes and lengths so you can enjoy the ride on your terms. In winter there is a special edition of the Polar Express train, with musical elves staff and hot chocolate included.

USA Tales has content written by niche experts, travelers, students, and people with real-life experience. Our content is also reviewed periodically by subject matter experts to ensure content accuracy and relevance. Have a question? Email us at [email protected]